Elysium Will Be Released In IMAX Theaters 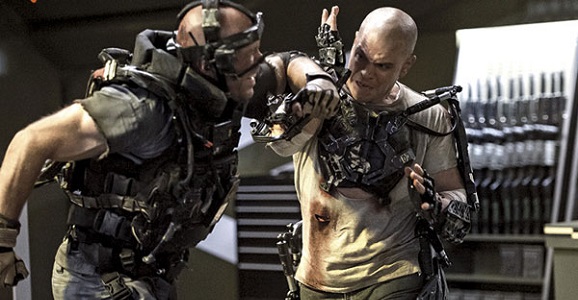 When Pacific Rim opens this weekend, hopefully to explosive box office numbers, you’ll have the chance to catch it on the big screen in your normal multiplexes, of course, or you can spend a few extra bucks to watch it on the big big screen at IMAX theaters across the country. Even if you don’t live near a theater with IMAX screens, it’s almost definitely worth the drive, especially for something of this scale. I can’t wait for 3D to take a nosedive in popularity so that more filmmakers and theater chains can convert to this superior way of viewing films. Geez, I sound like I work for them, don’t I? (Hint, hint, IMAX. No hint, hint, GFR.)

I’m extremely pumped to say the next film to give viewers the ultimate movie experience is Neill Blomkamp’s Elysium, as announced on the IMAX homepage. This is quite literally huge news, as this is the kind of movie that doesn’t necessarily have a built-in audience, even with the star power of people like Matt Damon and Jodie Foster. Just saying the term “exoskeleton” to non-sci-fi fans usually gets a less-than-positive reaction. So not only will this give Elysium a little extra cushion in the moneymaking department — something I usually turn my nose up at — but it will also give rabid fans like myself the best way possible to witness these massive worlds that Blomkamp and his team have created.

Elysium is a man-made space station where the elite and the wealthy can live their lives above the Earth, which has been ruined by overpopulation and widespread poverty. Intent on making it to Elysium by any means necessary, Damon’s cancer-stricken former criminal Max agrees to attempt a dangerous mission to thwart Elysium’s Secretary Delacourt (Foster) and her entire police squad, led by a brute named Kruger (Sharlto Copley). If he succeeds, it could mean a positive future for everyone on Earth. If he fails…well, if he fails, then this will be a pretty depressing movie. But at least it will still be a big and beautiful failure.

IMAX is really giving sci-fi fans their money’s worth this year, with Star Trek Into Darkness already having passed through, and films like Riddick and Ender’s Game both playing in the format later this year. Also, Christopher Nolan and Michael Bay have already confirmed they’ll be using IMAX cameras to film portions of Interstellar and Transformers 4, respectively. They should also run that new Cosmos series that’s in the works. And every other quality sci-fi related property. Just saying.

See Elysium in whatever format you want when it releases on August 9. (Less than a month!) Check out the trailer below, which now has the IMAX tag at the end.