Edge of Tomorrow Trailer Kills Tom Cruise, Like, A Lot

Based on Japanese author Hiroshi Sakurazaka’s best-selling novel All You Need Is Kill, Edge of Tomorrow is an upcoming science fiction action film starring Tom Cruise and Emily Blunt from Village Roadshow and Warner Bros Pictures. The movie’s premise is a mix between Starship Troopers and Groundhog Day, with humanity caught in a battle against aliens and the film’s protagonist dying in battle over and over again until he gets it right. Now Village Roadshow and Warner Bros. Pictures have served up a second trailer for the film, and it looks a bit better than the one we saw a few months ago. We get more of the film’s training sequences and a focus on Emily Blunt’s character, a high-ranking military officer who knows exactly what Cruise’s character is going through.

A few weeks ago, plot descriptions of the film’s first 20 minutes were released. From how it’s described, it sounds like Edge of Tomorrow just throws an audience into the film’s world with very little explanation on what’s going on.

The new trailer also gives us more looks at Edge of Tomorrow‘s action and kick-ass mech-suits. In addition to Neill Blomkamp’s Elysium, this is the second recent movie showcasing the sort of exo-suits that are already in the early stages here in the real world. This looks like something from an anime, and it’s pretty cool to see live-action actors wearing the imposing tech into battle.

Just from the trailers, it looks like Edge of Tomorrow is going to do a good job balancing live-action and almost cartoon-ish battle sequences. So far, it looks pretty good, but will audiences show up for another Tom Cruise science fiction movie? While I wasn’t a fan of Oblivion, Joseph Kosinski’s film saw moderate critical acclaim and proved to be a big moneymaker for Relativity Media and Universal Pictures, bringing in $286 million worldwide.

Edge of Tomorrow takes place in the distant future, after an alien race known as Mimics have attacked the Earth. Cruise plays Col. Cage, an army officer who is thrown into combat with very little training and experience. He is killed within minutes, but is caught in a time loop that forces him to re-live the battle again and again. Throughout the film, Col. Cage has to fight and die, until he figures out a way to stop the cycle and defeat the invading alien race with the help of Special Forces soldier Rita Vrataski (Blunt).

Edge of Tomorrow will hit theaters everywhere on June 6, 2014. 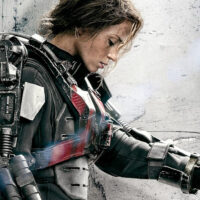