Edgar Wright is pretty much geek royalty at this point, having directed Shaun of the Dead, Hot Fuzz, and Scott Pilgrim vs. The World over the past decade or so. (This is also a guy who wants to make a friggin’ Ant Man movie, so his geek credentials are unquestionable.) What you might not know about those first two movies, unless you’re a die-hard Wright fan, is that they formed the first two installments of a planned trilogy co-written with Simon Pegg. Alternately known as the “Blood and Ice Cream Trilogy” or the “Three Flavours of Cornetto” trilogy, the films don’t share storylines, but they are connected thematically. Wright and Pegg have been hinting for a while now that the final installment was on the immediate horizon, and today it’s official: Universal has given the greenlight to The World’s End, which will begin filming this October for a 2013 release.

The press release includes the following intriguing plot synopsis, which reveals the basic setup but not much else — which is as it should be.

20 years after attempting an epic pub crawl, five childhood friends reunite when one of them becomes hellbent on trying the drinking marathon again. They are convinced to stage an encore by mate Gary King, a 40-year-old man trapped at the cigarette end of his teens, who drags his reluctant pals to their hometown and once again attempts to reach the fabled pub — The World’s End. As they attempt to reconcile the past and present, they realize the real struggle is for the future, not just theirs but humankind’s. Reaching The World’s End is the least of their worries.

Honestly, this movie had a guaranteed ticket purchase from me even if I didn’t know a single thing about its plot, but I will be interested to see just what form the mysterious goings-on hinted at above take. I remember back when the title was first mentioned, some interpreted it to mean we’d be getting a Wright/Pegg post-apocalyptic tale, but I’m not sure how well that jives with the synopsis. They’ve already tackled zombie movies and buddy-cop action movies, so what genre(s) could The World’s End be targeting? And will there be a guest appearance by the Restaurant at the End of the Universe?

One hint might come from the “Three Flavours of Cornetto” moniker, which refers to a brand of ice cream. Each film has an appearance by a specific flavor, which also is symbolic of the movie’s storyline. Shaun of the Dead features red strawberry — blood. Hot Fuzz had blue original Cornetto — representing the police. The World’s End is said to have green mint chocolate chip. What could the green represent? The Wikipedia entry suggests science fiction, but their cited source confirms the ice cream, but not the interpretation. I guess we’ll just have to wait and see. And now I’m craving ice cream…

To help celebrate the announcement, Universal unveiled the official teaser poster for the World’s End at Comic-Con. Check it out: 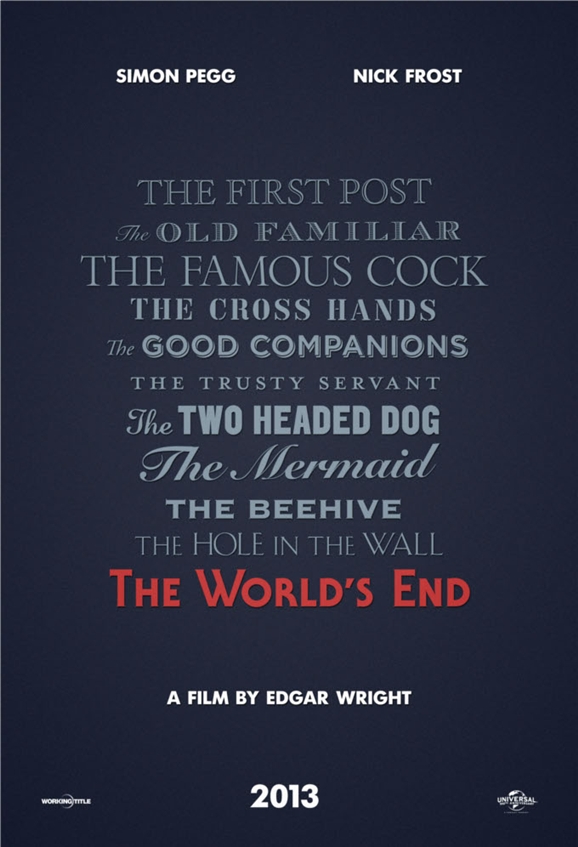