Most of the Dune talk in 2014 has centered on Jodorowsky’s Dune, the critically acclaimed documentary about Chilean/French filmmaker Alejandro Jodorowsky’s insanely ambitious, but ultimately unsuccessful, attempts to bring Frank Herbert’s Dune to the big screen in the mid 1970s. With folks like Orson Welles, Salvador Dali, H.R. Giger, Chris Foss, Jean Giraud, and Dan O’Bannon involved, it could have been something epic. But in in the end, it fell apart, which paved the way, eventually, for David Lynch’s controversial Dune adaptation in 1984. And while Lynch’s Dune might not be as interesting as the “what if” tale of Jodorowsky’s Dune, it still featured some gorgeous design work, which is on full display in this collection of concept art.

The images come via Ron Miller, an illustrator and concept art on Lynch’s Dune. After posting a personal remembrance of his time on the film on io9, he followed it up with a post full of behind-the-scenes Dune images, ranging from sketches to stunning concept paintings to actual model work and sets. We’re including a few of our favorites, but there are tons more over on io9, including early sketches by production designer Anthony Masters, who also worked on Stanley Kubrick’s 2001: A Space Odyssey. 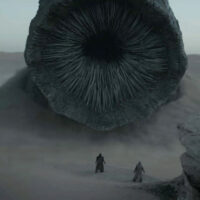