Drive Director’s Barbarella TV Series Is Still Happening, But Logan’s Run Remake Is Dead As Dead Can Be 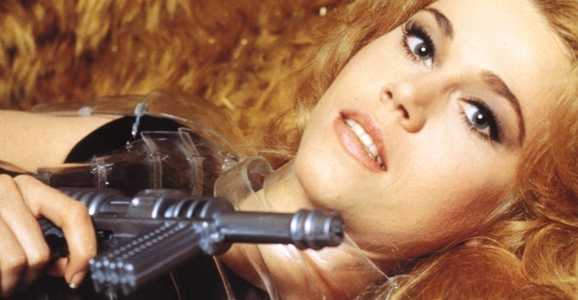 Director Nicolas Winding Refn won me over in a serious way with 2011’s Drive, a movie that bore almost no resemblance whatsoever to its advertising campaign, but in a good way. (For the inverse of that, watch Branded.) And while his continued man-crush on Ryan Gosling with Only God Forgives mainly just left me drowsy, I’m still intrigued to see anything the guy puts together. Now the director has provided an update on the two science fiction projects he’s been attached to in recent years, and it’s definitely a good news, bad news situation.

Actually, it’s a bad news, bad news situation if you ask me, but that’s only because I’m still recovering from the lingering psychic damage I suffered from forcing myself to watch Barbarella the last time I wrote about this whole thing. See, I’d never seen Barbarella, but when it was announced last summer that Refn was turning the cult classic into a TV show, I did the good journalistic thing and gave it a spin in the old Blu-ray player. It…did not go well. But my disdain for and occasional involuntary twitches caused by Barbarella are beside the point. Even I have to concede that, if the universe absolutely has to have a Barbarella show, I’m more interested to see one overseen by Refn (and written by the Bond guys) than I would be with many other creative teams.

Now, after not hearing much about the Barbarella show for a long while, Refn has updated us via an interview with Twitchfilm. Okay, so it’s not much of an update…

We’re still writing it. I would love to do it for a number of seasons, at least, I have a number of ideas that would see it through a number of seasons. But however you plan for something, I can tell you one thing — it’s not going to happen. There’s a great story that basically goes like this: How do you make God laugh? You tell him your plans.

But what about the more intriguing of Refn’s two sci-fi projects, his Logan’s Run remake? Well, here’s where the rest of the bad news comes in, because it’s apparently not just dead, but super-duper dead.

It’s dead as dead can be. It’s a great shame but I realised a couple of things. I was so in love with the original that I think I was disillusioned by the fact that if I made a remake I would be closer to the original, I would be part of the original more than any other, and I realised that that was a lie. That was illusion. It wouldn’t be like that. And also if I was going to make a $100 or $200 million movie, and trade off my creative freedom for that price, it needed to be something that was going to outweigh that loss. Because at the same time I’m very lucky to be able to make the films I make, and to exchange that for a larger canvas really needs to feel like the right swap. Logan’s Run just wasn’t it at the end. But I was able to take one of my ideas and put them into Barbarella, like Dune, I stole a little bit from what didn’t happen and put it into something else. That way the trade-off wasn’t so significant. But I think that maybe those kind of things only work if you stumble and fall.

Honestly, it’s not surprising to hear that Refn has Logan’s Run in his rearview — Ryan Gosling left the project about a year ago, so that seemed to bode ill at the time, since the actor and Refn continue to work together often. And while Refn’s Logan’s Run isn’t going to happen, the remake is apparently still alive in other hands. This past summer it was reported that BioShock creator Ken Levine had signed on to write a script for the remake. So I remain, tentatively, intrigued…

At this point it’ll be surprising if the damn thing ever gets made. The Logan’s Run remake has been in the works for years under various creative teams. Bryan Singer had it on his to-do list for several years, but alas, it was not to be.

Of course, now Refn’s on my shit list. I was really interested to see what he could have brought to Logan’s Run, but now he says he’s recycling some of those ideas in the Barbarella series, a show I desperately want to ignore completely. Uncool, Refn. Uncool.