A Dredd Sequel Needs Your Support And Your Signature 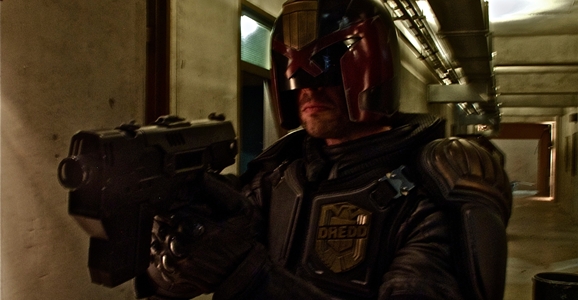 Last year’s Dredd was way too damn good to be relegated to history as a dismal box office failure. Not many of us saw Pete Travis’ adaptation of the ultra-violent comic book, but those of us who did haven’t shut up about it since, and we still hold out hope for a sequel. And now you can help. 2000 A.D., the publishers of the Judge Dredd comic books, have organized an online petition calling for a sequel, and for star Karl Urban to reprise his role as the grim, chiseled-jawed, law enforcement badass.

Despite the poor showing, a sequel may not be as far-fetched as you might imagine. Worldwide the 3D actioner grossed somewhere in the neighborhood of $35 million, which isn’t good by industry standards, but Dredd did have a relatively modest budget of $50 million. Though the hard-R mayhem didn’t draw large audiences in theaters, the people who saw it seemed to really like it, critical reaction was largely positive, and once it hit the home video market, sales went through the roof. We’re not talking about some cheap, throwaway DTV flick here, Dredd has legs, and there seems to be an audience. Whether that audience will plunk down their hard earned cash to buy a ticket the next time around remains to be seen, but there is a definite groundswell of support.

Dredd was a far more faithful adaptation of the source material than Sylvester Stallone’s 1995 Judge Dredd, which painted the dystopian future with a broad comic brush, lots of bright colors, and stupid jokes. Come one, Rob Schneider played his sidekick. This attempt was gritty, violent, and dark, much like John Wagner and Carlos Ezquerra’s comics. It was also a total blast. For one thing, Dredd (Urban) never removes his mask. All you see is jaw and scowl—which is all you ever see of the character in the funny books—as he and his partner, rookie Cassandra Anderson (Olivia Thirlby) climb a high rise headquarters of the vicious gangster Ma-Ma (Lena Headey).

For the uninitiated, Judge Dredd is set in a post-atomic urban center called Mega City One, which encompasses much of the East Coast of the United States. Outside is a scorched wasteland, but inside the remnants of humanity live, piled on top of one another. We’re talking two different kinds of bleak. Crime is so out of hand in this future that a fleet of Judges, law-enforcement officers that serve as the entire justice system rolled into one—judge, jury, executioner—have been unleashed to tackle the problem.

In addition to the petition, you can also follow the efforts on their Facebook page. Whether or not this will do any good in the end is debatable, but if there is enough public support, perhaps it could get the wheels moving, or get someone interested in the idea. Urban has said on multiple occasions that he is interested in taking the character out for another spin, and many of us would love nothing more than to see him ride again.