We have no (Salmon of) doubt this will be great. 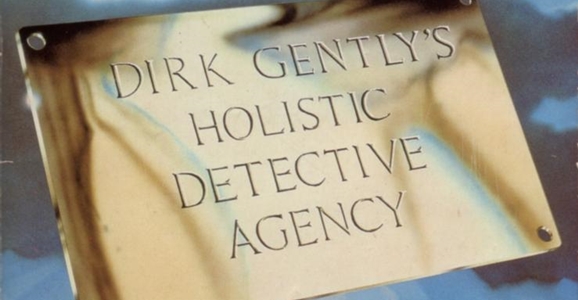 Douglas Adams will always be best remembered for his hilarious and beloved Hitchhiker’s Guide to the Galaxy series, and justifiably so. But they weren’t the only legacy he left us. If you were like me growing up, you tore through all the Hitchhiker’s Books, then looked around and thought, “I need more!” That “more,” in my case, was Adams’ Dirk Gently books, beginning with 1987’s Dirk Gently’s Holistic Detective Agency and continuing in 1988’s The Long Dark Tea-Time of the Soul. Well, if I had a time-traveling phone booth I’d zip back and high-five my ten-year-old self, because Dirk Gently is being adapted for television and becoming a new comic-book series.

The Dirk Gently books follow the titular character, a private detective with, as the press release puts it, “a belief in the fundamental interconnectedness of all things, a unique relationship with the laws of probability and physics, and a love of cats and pizza.” The series is being developed for television by IDW Entertainment and Ideate Media, who are looking for a network willing to make a direct-to-series commitment for the project. Chronicle screenwriter Max Landis is writing the pilot and serving as executive producer for the series.

In the press release, Landis gushes about his love of the Dirk Gently books:

Alongside the obvious yada yada I’m a lifelong fan, Long Dark Teatime of the Soul is one of the best books ever. Douglas Adams is a visionary who forever changed the way science fiction is written and talked about and even thought about and even the way real actual science is thought about and without whom our culture would be noticeably different for the worse, I’d also just like to say holy crap, it’s Dirk Gently. This is any writer’s ultimate project, and in the current TV space, it fits ridiculously well. Imagine a playground where you could come with any mystery, no matter how improbable, convoluted, or totally insane and then, simply by finding the right connections, you could tie it all down to one man, one private eye. If you’re familiar with the property, you know: there’s no freaking rules. Ancient gods? Sure. Larceny and petty crimes? Of course. Extra-dimensional aliens? I mean, probably; as long as you can make it funny, Dirk’s on the case. This is a dream project of mine, no joke, and I absolutely positively couldn’t be happier.

You could be forgiven for not knowing Landis’ name if you don’t keep up with screenwriting news. The son of An American Werewolf in London director John Landis, Max is a prolific screenwriter with numerous projects in various stages of development or production. However, the found-footage superhero movie Chronicle is the only feature-length film of his that’s made it to the big screen. His upcoming projects include a new version of Frankenstein starring Daniel Radcliffe and James McAvoy, American Ultra starring Kristen Stewart and Jesse Eisenberg, and his directorial debut, the comedy Me, Him, Her starring Haley Joel Osment (remember him?) and Geena Davis.

This actually isn’t the first time Dirk has been adapted for TV. The BBC aired four episodes of a Dirk Gently series penned by Misfits creator Howard Overman beginning in 2010. Hopefully this iteration of Mr. Gently will last longer.

Ed Victor, Adams’ friend and former agent, said, “Douglas Adams himself always maintained that his Dirk Gently novels had much greater dramatic potential than his better known Hitchhiker’s Guide to the Galaxy series. I think he is about to be proven right — yet again.”

There are few details about IDW’s accompanying Dirk Gently comic-book series, but it’s targeted for release next spring.