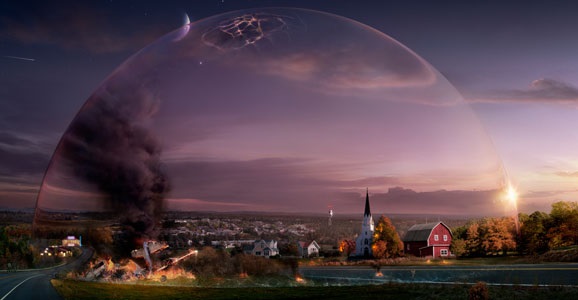 Well that’s one question answered. CBS will indeed bring it’s adaptation of Stephen King’s Under the Dome back for a second season. I don’t know about you, but I’ve always kind of viewed it as an extended miniseries. After all, King is known writing books so big you could club a zombie to death with one, so it made sense that it would take 13 hour-long episodes to get through one (the book does clock in at over 1000 pages). The network, apparently, has longer-range goals in mind. The ratings have been great, so of course they want to keep that momentum going. In addition to another 13 episode run, Under the Dome will also have at least one high-profile guest writer, a little guy named Stephen King.

We heard rumblings that there could be more. CBS Entertainment President Nina Tassler says, “We’re excited to tell more stories of the dome and the secrets in Chester’s Mill, and are thrilled to have the master storyteller himself, Stephen King, tell the first one of next season.” I haven’t read the book, but can I assume that the fact that we’re getting a second season means that they don’t find a way out from under the dome?

Under the Dome tells the story of a small town, that, much like Springfield in The Simspsons Movie, becomes encased by an invisible, impenetrable dome. They can’t escape, they can’t communicate, and trapped as they are, like the residents of a giant terrarium, all sorts of unpleasantness goes down. For a small town, there are a butt-load of secrets, everyone has a few skeletons in their closet, and the situation only enhances every little bit of neurosis and paranoia.

The show has also been a massive ratings hit for “America’s Most Watched Network.” Each Monday night the series averages 13.84 million viewers. Beyond big numbers for the live broadcast, they’re also seeing a ton of traffic from DVR playback, video on demand, and online streaming. Under the Dome is available to stream from Amazon Prime, and, according to the company, has been watched by more customers than any other show in their arsenal. Considering the wealth of streaming content they’ve been buying up, that’s no small feat.

I gave the series three or four episodes, but it never really clicked for me, but as you can see from the ratings, there are a lot of people tuning in week after week to see the continuing saga of Chester’s Mill. This may have something to do with the summer schedule. Some cable networks run their programs in the summer—AMC is set to debut the final episode of Breaking Bad in a short time—but most of the programs on the “big three,” and Fox, are in reruns. In a manner of speaking, Under the Dome is the only game in town. Not to denigrate fans of the show, it’s a cool concept, and people seem to legitimately enjoy it, but for some reason it simply doesn’t do it for me.

I’m curious to see what direction King will take the show. I like that they brought him in to write the first episode of season two, and not just some random hour buried in the middle. When they do that, let an author write something based on his or her own material, it always feels like they’re throwing them a bone. But who knows better how to continue on in their own world than the author, and King is a big enough name he can write whatever the hell he wants.