Monthly Doctor Who Stories From Well-Known Authors In 2013; Fingers Crossed For J.K Rowling And Neil Gaiman

This year Doctor Who is celebrating its 50th anniversary, and we can expect all manner of exciting announcements as the year rolls on. Now the BBC has released word of one of those celebratory events: a series of 11 Doctor Who short stories to be written by “well-known children’s authors.”

The concept is pretty cool. Beginning later this month, the stories will go up on a monthly basis through November 2013, with each new story focusing on one of the Doctor’s regenerations, beginning with William Hartnell and taking us all the way up to Matt Smith’s current incarnation. Once they’re all published, they’ll be collected for sale as an anthology book.

Earlier today, the official Doctor Who Facebook page announced that the first story, focusing on the First Doctor, will be penned by Eoin Colfer. He’s best known for the Artemis Fowl young adult series, but genre fans might remember his for penning the sixth Hitchhiker’s Guide book, And Another Thing… published in 2009 (some eight years after original author Douglas Adams passed away). I know from past experience that And Another Thing… makes many fans’ blood boil, but hopefully he’ll bring something good to his Doctor Who outing.

It will be great fun in coming months to speculate what other “well-known children’s authors” could be penning these Who short stories. Obviously we’re in the middle of a young adult lit boom that’s been going since the Harry Potter books first hit shelves. And obviously there are a lot of writers who could fit that description, but while we’re on the subject of Harry…I imagine J.K. Rowling has got to be a possibility, right? Assuming she’s a Who fan and/or interested. Die-hard Who fans will likely recall that former showrunner Russell T Davies had at one point approached Rowling about penning an episode of the show, but she was too busy at the time. With Rowling so well known for the world she created in the Potter books, it would be intriguing to see what she does with the Who-niverse.

Another writer whose name instantly comes to mind is Neil Gaiman, since he’s a devout Who fan and has written/is writing a couple of episodes for the show, and has written several things aimed at kids in addition to all his other stuff. I’d think he would be a given, schedule permitting. In fact, some have cited recent tweets from Gaiman as suggesting that he’s already on board. He mentioned rewatching the Who charity spoof Curse of the Fatal Death, but when a fan outright asked him about the short stories, he replied with:

Obviously, that doesn’t sound like a confirmation, but I’d imagine he’d stay mum regardless, since the BBC is making a big deal of announcing the authors as the months go on. Now that we know Colfer is penning the first story, the BBC will release a promo video about the author on January 11th, and then the story itself will post on January 23rd. Presumably the further story releases will follow the same pattern each month. Here’s publisher Julie Matthews, via ScienceFiction.com:

We are delighted to have 11 sensational children’s authors involved in the series, all bringing an individual style, imagination and interpretation to their e-short tribute to The Doctor. This is a who’s who of children’s fiction coming together to celebrate the much-loved Doctor Who.

So what do you think? Which authors would you like to see contribute a Doctor Who short story? 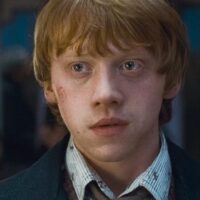 Rupert Grint On The Accusations Against JK Rowling