Halloween is still two weeks away, so by reckoning it should just about be time for every retail establishment and website to begin reminding us that we need to buy neat stuff for the people in our lives that we don’t want to drive over with with a steamroller. Thankfully, we geeks tend to make things a lot easier on our loved ones when it comes to Christmas shopping, because while our well-intentioned loved ones may never even have heard about some of the things that obsess us, we almost always have a huge inventory of related goodies that we Simply Must Have. And if you have a new Doctor Who fan in your life, we’ve got the mother lode for you: a massive Doctor Who limited Edition Gift Set which is set to arrive next month. 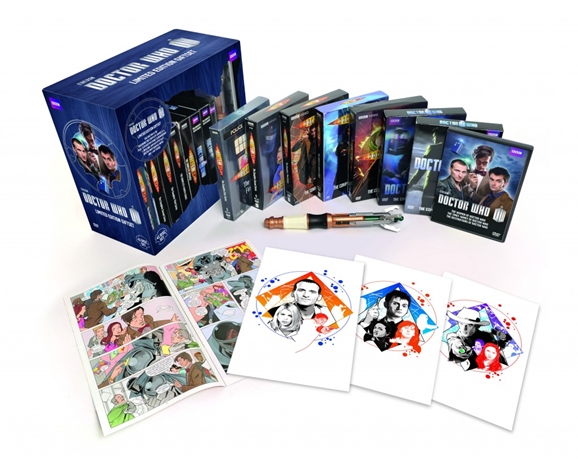 BBC Home Entertainment has just released the specs for the ridiculously extensive box set, and it’s about as close as you can get to being a definitive Doctor Who collection, he said, adding a proviso. This obviously isn’t a box set packaging the entire 50-year span of the series, because they’d probably have to deliver the damn thing by helicopter. It will make a great gift for any new Who fans who got hooked by the modern incarnation of the show. The set will package together the first six seasons Who 2.0, beginning with Ninth Doctor Christopher Eccleston, on through David Tennant’s entire run, and wrapping up with the first two seasons of Eleventh Doctor Matt Smith. That’s why I’m recommending it for new fans: long-time Who viewers will likely already have most of this in their collection.

Still, the set might make a worthwhile gift for any Who completists out there. In addition to the various seasons of the show, the gift set will also include three specials: “The Women of Doctor Who,” “The Timey-Wimey of Doctor Who,” and “The Destinations of Doctor Who.” That’s in addition to the bonus features that were packaged with the earlier releases of the Who season sets, and in my experience those sets were pretty packed already. Still not convinced? The set will also include several collectible art cards, a comic book, and your very own Sonic Screwdriver replica.

There’s also some good news for those of you who already own the previous seasons. The first five episodes of season 7 will be releasing a week earlier, on November 13th, on both Blu-ray and DVD. It will include “Asylum of the Daleks,” “Dinosaurs on a Spaceship,” “A Town Called Mercy,” “Power of Three,” and “The Angels Take Manhattan.”