Dead Space 3 Carves Up Necromorphs This Week In Science Fiction

The original Dead Space is one of my favorite games of the current generation. The second one ramped up the action while still preserving the scares and tense atmosphere, for the most part anyway. Dead Space 3 is arriving on shelves tomorrow, and many fans have their fingers crossed that the new sequel doesn’t shift the focus even more to the action, at the expense of the scares. I realize you can only have hero Isaac Clarke crawling through darkened corridors so many times before some variety is needed, but I hope the developers haven’t lost the sense of what made the first one so much fun.

Among other things, Dead Space 3 will be taking Isaac Clarke groundside. The third game finds beleaguered engineer and part-time hero Clarke exploring the frozen landscape of a planet called Tau Volantis, as he tries to find a way to stop the Necromorph threat once and for all. Unlike in previous games, Clarke will have some backup along the way. DS3 will allow for co-op play throughout the campaign, allowing a second player to drop in as Sergeant John Carver.

It’s unclear if Dead Space 3 will be the final game in the series, but at the very least we probably won’t see the next installment until after the next-gen consoles launch (possibly late this year). Dead Space 3 will be available for Xbox 360, PlayStation 3, and Microsoft Windows.

Continuum (Syfy, 8/7c) — “Matter of Time”
Kiera and Carlos are on the hunt for the murderer of a scientist who was on the edge of making a major energy breakthrough. 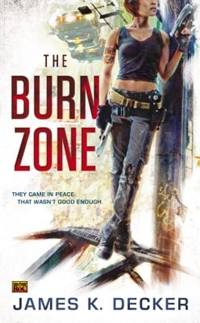 “The Burn Zone” by James K. Decker
Via Amazon:

Plagued by overpopulation, disease, and starvation, humanity was headed for extinction—until an alien race called the haan arrived. And then the real trouble began.

It’s been a rough day for Sam Shao. As part of a program that requires humans to act as surrogates to haan infants, Sam has been genetically enhanced to bond with them. So when three soldiers invade her apartment and arrest her guardian for smuggling a dangerous weapon into the country, Sam can sense that something isn’t right. One of his abductors is a haan masquerading as a human, and the supposedly fragile haan seems to be anything but.

Racing through the city slums, trying to stay one step ahead of the mysterious haan soldier, Sam tries to find the man who, in her twenty years, has been the only father she’s ever known. Could he truly have done what he is accused of? Or did he witness something both human and haan would kill to keep hidden? The only thing certain is that the weapon is real—and lost now somewhere in a city of millions.

Fighting the clock, Sam finds an ally in Nix, a haan envoy devoted to coexisting with humans, or so it seems. But what she really needs are answers. Fast. Or else everything she knows—and everyone she loves—will burn. 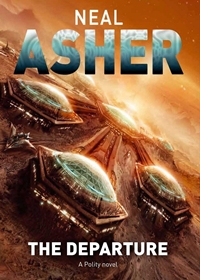 “The Departure (The Owner: Book One)” by Neal Asher
Via Amazon:

An overpopulated world is under the brutal, high-tech thumb of the Committee. Towering robot shepherds, pain-inducers, and reader guns maintain control over masses of zero-asset citizens, but for the elite this not enough. Twelve billion must human beings must die before the Earth can be stabilized, and the Argus satellite laser network is almost ready.

Waking in a crate destined for an incinerator, Alan Saul remembers only pain and his torturer’s face. But he has company: Janus, a rogue AI inhabiting the forbidden hardware in his skull. Saul intends to stop Argus and get his revenge on the Committee–once he finds out who he used to be.

Abandoned by the Committee, the Antares Base faces extinction. The colonists there will not be returning to Earth nor will they be receiving any additional supplies or support. Unless they are very ingenious, they will run out of resources and be dead within five years.

As if that’s not dire enough, Varalia Delex finds herself caught in a violent power struggle with the base’s ruthless political officers–who see everyone else as expendable. As spilled blood turns the Red Planet even redder, Var discovers that Mars holds very new and interesting ways to die.

Face Off (Syfy, 9/8c) — “Eye Candy”
The competitors are tasked with making new creations inspired by candy, of all things. Watch out for the snozzberries, they taste just like snozzberries. 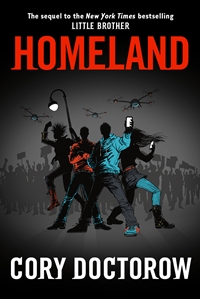 BoingBoing’s Doctorow is back with yet another novel, this one a follow-up to 2010’s Little Brother. Via Amazon:

In Cory Doctorow’s wildly successful Little Brother, young Marcus Yallow was arbitrarily detained and brutalized by the government in the wake of a terrorist attack on San Francisco—an experience that led him to become a leader of the whole movement of technologically clued-in teenagers, fighting back against the tyrannical security state.

A few years later, California’s economy collapses, but Marcus’s hacktivist past lands him a job as webmaster for a crusading politician who promises reform. Soon his former nemesis Masha emerges from the political underground to gift him with a thumbdrive containing a Wikileaks-style cable-dump of hard evidence of corporate and governmental perfidy. It’s incendiary stuff—and if Masha goes missing, Marcus is supposed to release it to the world. Then Marcus sees Masha being kidnapped by the same government agents who detained and tortured Marcus years earlier.

Marcus can leak the archive Masha gave him—but he can’t admit to being the leaker, because that will cost his employer the election. He’s surrounded by friends who remember what he did a few years ago and regard him as a hacker hero. He can’t even attend a demonstration without being dragged onstage and handed a mike. He’s not at all sure that just dumping the archive onto the Internet, before he’s gone through its millions of words, is the right thing to do.

Meanwhile, people are beginning to shadow him, people who look like they’re used to inflicting pain until they get the answers they want.

Fast-moving, passionate, and as current as next week, Homeland is every bit the equal of Little Brother—a paean to activism, to courage, to the drive to make the world a better place. 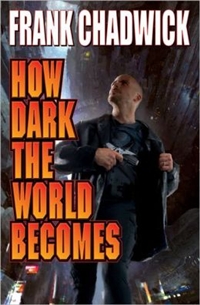 “How Dark the World Becomes” by Frank Chadwick
Via Amazon:

The exciting debut of a nonstop noir SF from legendary game creator Frank Chadwick. With one single act of kindness, a tough-as-nails hood with a heart of gold saves two alien children from assassination—and resets the balance of galactic power in the process.

Sasha Naradnyo is a gangster. He’s a gangster with heart, sure, but Sasha sticks his neck out for no man. That’s how you stay alive in Crack City, a colony stuffed deep into the crust of the otherwise unlivable planet Peezgtaan. Alive only—because if you’re human, you don’t prosper, at least not for long. Sasha is a second generation City native. His parents came to this rock figuring to make it big, only to find that they’d been recruited as an indentured labor force for alien overlords known as the Varoki.

Now a pair of rich young Varoki under the care of a beautiful human nanny are fleeing Peezgtaan, and Sasha is recruited to help. All things considered, he’d rather leave the little alien lordlings to their fate, but certain considerations—such as Sasha’s own imminent demise if he remains—make it beneficial for him to take on the job.

But Sasha discovers his simple choice has thrust him into the midst of a political battle that could remake the galactic balance of power and save humanity from slow death by servitude. Now all he has to do is survive and keep his charges alive on a hostile planet undergoing its own revolution.

But it’s the galaxy that had better watch out. For now the toughest thug in Crack City has gotten his first taste of real freedom. He likes it, and wants more. 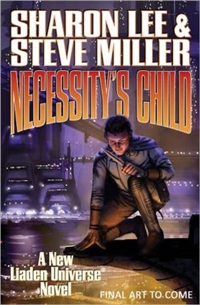 A man without a past caught between powerful Clan Korval and secretive kompani.

Stirring SF adventure from master storytellers Sharon Lee and Steve Miller—#16 in the award-winning Liaden Universe® saga. Space ships, action, adventure—all tied together with a strong dollop of romance and clan intrigue – make this a compelling series for a wide range of readers, from romance to military SF lovers.

The kompani sees none as an enemy, and yet few as friend. The kompani exists in many places, living quietly in the shadows, thriving off the bounty that others have no wit to secure, nor skill to defend. Their private history is unwritten; their recall rooted in dance and dream.

The humans of Clan Korval is in many ways the opposite of the kompani. The interstellar trading clan is wealthy in enemies, fortunate in friends. Korval protects itself with vigor, and teaches even its youngest children the art of war.

And when representatives of Clan Korval arrive on the planet Surebleak where the kompani has lived secret and aloof, it seems to the kompani that they are borne by the very winds of change.

Change can be a boon for in change lies opportunity. But the arrival of Clan Korval, establishing itself upon Surebleak with its friends, its enemies, and, most of all, its plans may bring catastrophe, changing the culture and the kompani, forever.

In this time of change, the lives of three people intersect — Kezzi, apprentice to the kompani‘s grandmother; Syl Vor, Clan Korval’s youngest warrior; and Rys, a man without a world, or a past. 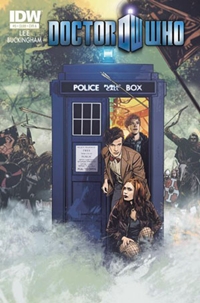 Doctor Who #5 (IDW Publishing)
In the latest issue of the new ongoing Who series, the Doctor and the Ponds decide to take a trip to see the 1966 World Cup final. Unfortunately, they overshoot their target date…by about a thousand years.

Star Trek #17 (IDW Publishing)
The Trek ongoing comic series is ramping up to the release of Star Trek Into Darkness by exploring the backstory of the Enterprise’s core characters. This month, the spotlight is on Leonard “Bones” McCoy, and how he wound up on that Starfleet shuttlecraft where he first met James T. Kirk.

Community (NBC, 8/7c) — “History 101”
The Hugo-nominated sitcom — you heard me — returns for its first season after the firing on creator Dan Harmon? Will it be a shadow of its former, hilarious self? Will it eventually be able to rival The Walking Dead when it comes to showrunner turnover? Tune in expecting the worst, but hoping for the best.

Do No Harm (NBC, 10:01/9:01c) — “Don’t Answer the Phone”
Thanks to the series premiere’s dismal ratings return, you probably shouldn’t get too attached to this one.

Person of Interest (CBS, 9:01/8:01c) — “One Percent”
“Reese and Finch struggle to maintain their anonymity while protecting a tech billionaire whose resources rival their own and threaten to sabotage their efforts to save his life.”

Star Wars: The Clone Wars (Cartoon Network, 9:30 a.m./8:30c) — “Sabotage”
After an explosion in the Jedi Temple, Anakin and Ahsoka are on the hunt for a traitor.

Battlestar Galactica: Blood & Chrome (Syfy, 8/7c)
If you skipped watching the BSG prequel series on the web, you can watch the whole kit-and-kaboodle tonight. This TV version will also include some new material, so it might be worth a watch even if you’ve already seen it.

The Walking Dead (AMC, 9/8c) — “The Suicide King”
AMC’s zombied drama is back, and you can bet things are only gonna get worse for Rick and his fellow survivors. “Rick attempts to rescue an imperiled member of the group, while a recent attack has left Woodbury in disarray. Later, concerns are raised at the prison after new guests arrive.”