With the word that Syfy and David S. Goyer are officially developing a TV series focused on Krypton — and on Superman’s grandfather — I’ve been thinking about how DC’s ambitious TV and movie plans could affect each other. Right now, DC is trying both to compete with Marvel’s huge head start at world-building and to set itself apart from Marvel’s “everything is connected” approach. So they’ve gone the opposite direction, with an interlocking movie continuity in the works while DC’s various TV properties unfold in their own separate realities (with the exception, so far, of The CW’s Arrow and The Flash). But what if we could instead have the best of both worlds? Or, more to the point, the best of infinite worlds?

One of the things that made the DC universe so fun over the years was the notion of the “multiverse” — countless parallel worlds, some dramatically different from the core DC universe of “Earth-1,” while others varied only in the smallest of way. I loved seeing Earth-2’s Justice Society — composed of the older “Golden Age” versions of DC’s heroes — teaming up with Earth-1’s Justice League to take down Earth-3’s Crime Syndicate, and that was one of the least nutty things that the multiverse made possible. So why not apply this multiverse idea to the various DC TV and film projects? DC Chief Creative Officer Geoff Johns even hinted such a thing was possible a while back, and the concept is back in play at DC comics right now thanks to Grant Morrison’s Multiversity event. Honestly, the more I think about this, the more I love the idea. So, let’s break down why the notion of a DC movie/TV multiverse has the potential to be amazing. 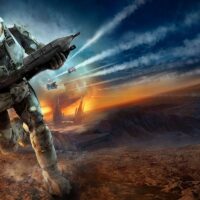 The Halo Movie: Why It Didn’t Happen And Why Halo Is On TV Instead