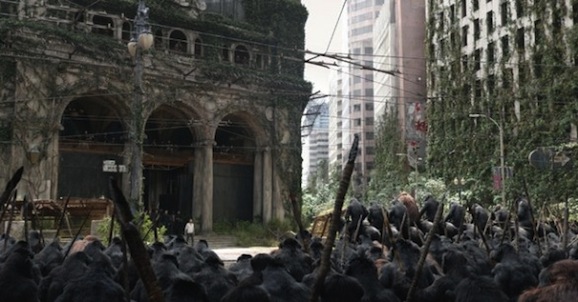 Nick: It’s like, I knew what was coming, because the story deemed it so, but I wanted everything to go wrong on the human end of things, while the apes’ home stayed intact. I mean seriously, they built all that in 10 years.

Brent: That’s a good point. You always knew where the story was going, that this fragile peace was doomed to fail in spectacular fashion, but you’re connected enough to the apes that the predictability never really detracts from your investment.

Nick: It has to be said how well Toby Kebbell (Koba) and Karin Konoval (Maurice), and even Judy Greer (Cornelia) do as their respective apes, most with very little dialogue. Koba is hardly Hans Gruber as far as villains go, but those facial expressions are all anyone needs to know about him, and Maurice is the most cuddly “please be my best friend” character in sci-fi history.

Nick: I feel like something could be said about Michael Giacchino’s score. It’s incredible, though I mostly mean for the first half. He goes a little overboard when everything went haywire in the latter portions of the movie.

Brent: For me it was another piece of the puzzle that went into creating the larger picture. It’s one of those elements that you don’t really notice as it is happening, even though it plays a key part in setting the mood and tone. Again, for the first part. You’re right bout it getting over the top during the climactic scenes and comes off of the rails.