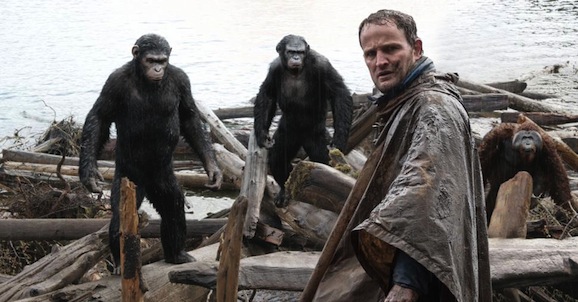 Brent: Dawn is one of those movies that remind me why I love movies so much in the first place. You can dissect it on numerous different levels—thematically, the performances, the score, the special effects—and we’re going to. But at the same time, while I sat there in the theater watching, trying to break it down, I found myself completely sucked into the story onscreen. The characters, the narrative, everything just captures you in a way not a lot of movies do anymore.

Nick: I almost absolutely agree with that assessment for most of Dawn‘s runtime, but there were those moments that made me very aware of where I was and what I was watching. And I don’t want to ruin it for everyone or get a target printed on my forehead, but Gary Oldman‘s character had a lot to do with why this wasn’t a great film for me, merely a very, very good one.

Brent: I agree with you on Oldman, he is the weak link. But I think I was kind of expecting that. I read the prequel novel (Dawn of the Planet of the Apes: Firestorm) in which his character, Dreyfus, figures prominently. Even there, even on the page, he’s single note and boring, though less over the top. So I was preprogrammed to completely ignore him. And was glad to do it.

With the glaring exception of Oldman, however, the cast and characters were a pleasant surprise. The script does a fantastic job of squeezing a lot of characterization into a short space. We don’t get a ton of backstory and details, but we do get to watch these people and apes and learn about them like that, not through some collection of facts about their past. Their actions tell you what you need to know about them.

Nick: I don’t know if I would have liked this movie (or if this movie could have ever existed) if this involved two groups of humans, because the characterization is so rote, though not as embarrassing as other blockbuster characters. I think because the apes were such a marvel to watch, that it allowed me to deal with the humans going through the predictable motions.

I really like Jason Clarke in anything, regardless of if he’s a passive or active character. I think Brotherhood could have been even better if his other brother was an ape.

Brent: Everything is better with an ape brother.

Nick: If, in the third movie, Ellie (Keri Russell) runs away with Caesar, the ape leader played by Andy Serkis, I would pay to watch them bone in 3D. Perversions aside, I quite like Russell as a grown actress, even though her character suffers the worst amount of shortchanging the plot has to offer.

Brent: But even though she is, admittedly, short changed, there’s more going on. Or perhaps more accurately, she brings more to the part than similar characters in other blockbuster movies. Maybe that’s what I’m trying to get at, that even though these aren’t always the deepest, most thorough characters, they still managed, for me at least, to be more than they could have been.

Nick: Ha-ha, I’m pretty sure that last part was deeper than her character. I’ll concede that almost everyone involved was able to enhance information-free scenes better than less capable actors. And dammit, why didn’t Oldman tone it down to everyone else’s level? Was this part written for Nicolas Cage?