The Dalek Invasion Of Boulder, Colorado

Those cheeky Daleks are at it again. Not content to try and conquer/destroy the universe on a regular basis, they were recently spotted staging an incursion on the campus of MIT. And now it looks like they may be forming a beachhead where we least expected it: in Boulder, Colorado. While there have been no physical sightings of the warmongering cosmic pepper mills just yet, an ominous warning did appear on a Boulder road sign warning of the invaders. 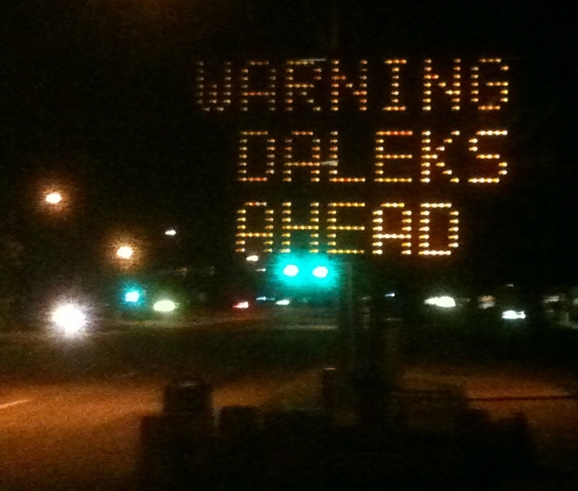 The Denver Post reports that the message appeared overnight a few weeks ago, but was swiftly repaired to display its originally intended message: “Delays Ahead.” Well, obviously if there are Daleks ahead, that’s going to cause delays. Those guys are right bastards.

This isn’t the first time a Boulder-area road sign was hacked. Last spring one of the signs was altered to display the warning “ZOMBIES AHEAD.” As for this incident, Colorado Department of Transportation spokesperson Ashley Mohr said that “”It was locked, so we’re not quite sure how folks were able to break into it. But we’re looking into it.” The explanation should be obvious to Doctor Who fans. Clearly this is The Doctor’s work. After all, no mere padlocks or password protection could defend against a determined Time Lord armed with a sonic screwdriver. So you heard it here, folks: if you’re in the Boulder area, keep an eye out for angry Daleks. Don’t worry, I guarantee you’ll be able to hear them coming.