The CW May Turn Battle Royale As A Weekly Series

Before The Hunger Games pitted child against child in a winner-take-all deathmatch, there was Battle Royale. There are similarities to be sure—kids forced to violently kill one another by a totalitarian regime is chief among these—but those are most likely incidental, especially considering Suzanne Collins claims she hasn’t seen the movie.

Plans for an American remake of the Japanese hit, based on a novel by Koushun Takami, have been in since the movie dropped in 2000. The project stalled out a while back, but now it looks like Battle Royale may see an English-language version of the story, as an episodic television show on the CW network, no less. You know the CW, they have Gossip Girl, 90210, and Arrow, the adaptation of DC Comics’ Green Arrow.

The LA Times reports that the network is in preliminary talks with the folks who represent the project. If a deal is eventually reached the CW would acquire the rights to Takami’s novel, “then unpack and expand on it for an hourlong dramatic series.” According to the source, Takami would have to approve any contract.

However coincidental, the similarities to The Hunger Games caused New Line to scrap plans for a big screen Battle Royale. Who knew American audiences would take to kids slaughtering each other with such gusto, and no one likes a copycat.

The article goes on to say that network already has a similarly themed show, The Selection, in development. It tells the “story of young adults battling for survival in a dystopian future.” Odds are a network isn’t going to run two shows with dystopian future teens struggling to survive.

No deal is place at the moment, and from the sounds of the Times piece, it doesn’t sound too likely. It’s hard to imagine any network outside of HBO, Starz, Cinemax, Showtime, or one of those coming anywhere close to doing a Battle Royale series right. The source material is too bleak, graphic, and violent for network TV. It’ll be curious to see how this would develop as a weekly show. How much teen melodrama they inject into th show to appease their core audience? 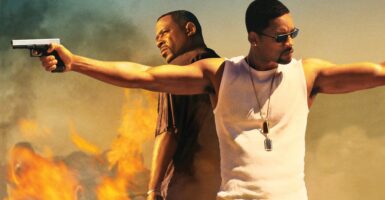