Speaking of Comixology, they’ve got a sale on X-Files comics running through tomorrow. If you haven’t sampled X-Files: Season 10 yet, which is in-canon and which picks up with Mulder and Scully being drawn out of Witness Protection and back into their old weird world, this is a perfect excuse to check it out. The nine available issues are all marked down to $0.99 a pop, and you can also pick up collected editions of the X-Files comics published by Topps back in the ‘90s. Check out the sale right here.

Scott Travers’s special suit lets him move through our world unseen and untouchable within a shadowy parallel dimension-but he doesn’t know how the suit works or where it came from. With his benefactor missing and unfriendlies after his Blackout gear, Scott must find answers before the answers find him! The embodiment of chaos has taken an interest in earth, and the physical laws of the universe are beginning to come apart at the seams. When Newtonian physics falter in New York City and weirdness is on the rise, you know who’s gonna get called… ‘Mass Hysteria!’ continues here! With many monsters now inhabiting a new home, peace seemingly descends on Earth. Little does humanity realize that the greatest danger now lurks under the waves! Lucy and the Kaiju Watchers will have to act fast to determine the nature of the new threat! The UNSC Infinity is ambushed by an unexpected enemy while on a mission to rescue a damaged civilian freighter. Across the galaxy, an undercover Lasky enlists the help of an old friend in rooting out a spy inside the UNSC. ‘STRATEGIC ASSASSINATION’ Simultaneous actions on three different worlds result in the most jaw-dropping issue of THE MANHATTAN PROJECTS to date! The Illusive Man’s agents redouble their efforts to resurrect Shepard, and in doing so are led to the very model of a scientist salarian — Mordin Solus! In a cathedral in Prague, Cal prepares for a final showdown with his nemesis Arkady, but what will fell him first: his cancer, the bullet from the Russian’s SIG Sauer, or the realization that nothing — nothing — of the past decade was what it seemed? The conclusion of ‘Bloc,’ the most groundbreaking arc of The Massive to date, takes us into the final year of the series with a stunning reveal. On Earth, a hacker causes an economic meltdown in what seems to be a rescue plan to save the vitros, who are trapped in space on a failing satellite. Serenity is found! The crew, including Jayne and a certain bounty hunter, get themselves ready to restock and retrieve when River wakes from her self-induced sleep and gives Mal a mandate…which will eventually — hopefully — maybe — lead to Zoe’s rescue! After a crash landing on a wild planet with her captor — and former flame — Ramid, Ania Solo is having trouble shaking the other bounty hunter on her tail. She’s going to need some help from someone, but when you’re accused of murdering an Imperial Knight, friends are hard to come by! ‘ALL OUT WAR,’ Part Ten This war has begun to take a toll on us all. 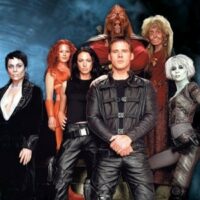 Farscape: Everything You Need To Know About The Comics Before The Movie 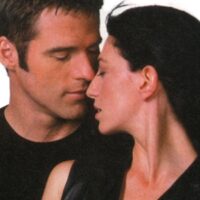 Farscape Creator Confirms Movie Spin-Off Is In The Works 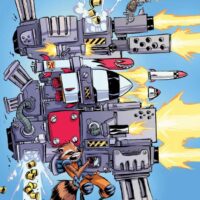