Adding a mystery element to a science fiction setting can make for some truly memorable storytelling. What’s the story behind this crashed alien vessel filled with strange leathery eggs? Who destroyed the Scopuli? What are the Reapers? Throw in a dash of good old-fashioned horror and you’ve most certainly got our attention. If the same holds true for you, you might want to check out Image Comics’ Southern Cross, due out this winter from Becky Cloonan and Andy Belanger.

Here’s how Cloonan herself describes the series, to go along with the creepy-ass cover above:

Southern Cross is an ongoing Sci-fi mystery, with a healthy dose of creeping horror thrown in for good measure. The first six issues take place on a voyage to Titan, Saturn’s largest moon, as Alex Braith uncovers a mystery surrounding her sister’s recent death — one that is ultimately going to change her life, and the lives of countless others.

Belanger is a self-described huge horror fan, and he initially pitched the idea of a collaboration to Cloonan. “He asked me to write him a science fiction horror story,” recalls Cloonan. “Tell me, how could I resist that offer?”

As for Belanger, he says he’s wanted to draw this sort of story for years:

I think the scariest stories, the most successful thrillers are the ones that start as a subtle tease, then build to bloody crescendo. Becky has tapped directly into that vein with her chilling mini comics — anyone who has read them knows she can weave a nail-biting story. … [T]his book is a chance for us to really get under your skin. So strap in and prepare to experience another dimension in terror. ‘Black Light District, part 1’ — The area formerly known as Sector One has been sealed off from the rest of Mega-City One — locking the Dark Judges in, but also keeping most of the Justice Department out!

The only man who can cross the border is Judge Dredd, so it’s up to him to single-handedly rescue the Chief Justice and the Council of Five, who are trapped inside and fighting for their survival. Meanwhile, there’s a new Acting Chief Justice, and he’s got a whole lot of ‘reform’ in mind…

You’ve never seen Mega-City One like this before. Step inside before it’s too late… Tomas and fellow freedom fighter Kurt have escaped the horror of the Mexican town La Calma and the aliens who hunted them. Or so they think. However, now at adrift at sea, a greater alien horror awaits them, with no way to destroy it and nowhere to run. The world is falling apart around Steve Austin. Maskatron is out of control and appears to be unstoppable. Oscar Goldman’s carefully crafted OSI kingdom is in shambles. And with his bionics failing and the entire NASA program transformed into an alien landscape, the Six Million Dollar Man could be heading for the scrapheap. The key to Steve’s survival may rest with the one person closest to him, Jaime Sommers, the Bionic Woman! Join the ranks of bionic fans in this official continuation of the classic Six Million Dollar Man television series! The Minoan Agendas: Chapter Three-The Invaders. The captured Star Slammer, Rojas, has broken free and is loose aboard the Starship Meredith.

Colonel Phaedra and her squad of Space Bulls are searching the ship desperately, only to discover that the Meredith herself is being attacked by a military force clad in hardened space armor!

Just as the Colonel locates the Slammer, an armored squad with ill intent blows through the airlock and corners them both! Let the dance begin. Count Dooku is possessed by the spirit of Mother Talzin! Darth Maul’s Shadow Collective is shattered! The Separatists attack! And Darth Sidious himself enters the fight! Welcome to the world of Battlestar Galactica as never seen before, as #1 NYT Bestselling Author Tony Lee gives it a Steampunk spin! After Professor Baltar’s clockwork Cylonics destroy the Colonial Empire, Arch Duke Adama learns that his son Apollo is missing! It’s up to Lady Athena to travel to the Sky Pirate world of the Rising Star and ask for help from the only hope she has — the disgraced Captain Starbuck and his humanoid / Daggit copilot Muffit… AUTOBOTS VERSUS EARTH! OPTIMUS PRIME and the AUTOBOTS discover the humans’ secret — and they aren’t pleased with what they learn!

Will the DECEPTICON’s alliance tear down the peace — and will the world learn the CYBERTRONIANs are back? When a blue-collar worker from New Jersey passes prophetic messages to the FBI from a mysterious ‘Mr. Zero,’ Mulder is convinced it is the same otherworldly entity that contacted the FBI through a suburban housewife in the 1940s.

This similarly named ‘Mr. Xero’ pointed the FBI toward many unusual cases, leading to the establishment of ‘the X-Files’! 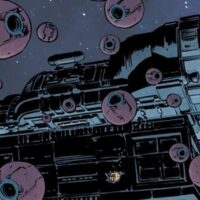 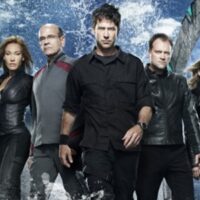 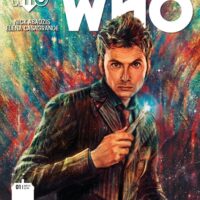