Helix (12:00pm – 1:00pm, Indigo Ballroom, Hilton San Diego Bayfront)
Syfy’s Helix was a show that pretty consistently under-impressed for most of its freshman season, but I must admit to being intrigued by the surprising direction it took in its final episodes, which suggest it will be a very different show in season 2. Executive producers Ronald D. Moore and Steven Maeda will be on hand to tease season two, along with cast members Kyra Zagorsky (Dr. Julia Walker), Mark Ghanime (Major Sergio Balleseros), Jordan Hayes (Dr. Sarah Jordan), and Neil Napier (Dr. Peter Farragut). Sadly, Billy Campbell isn’t on the guest list. Maybe he’s got a bad case of the black ooze.

Defiance (1:00pm – 2:00pm, Indigo Ballroom, Hilton San Diego Bayfront)
Grant Bowler (Nolan), Julie Benz (Amanda Rosewater), Jaime Murray (Stahma Tarr), and “the rest of the cast” will discussing the currently airing second season of the Syfy hit, as well as the future of the show. Doesn’t look like showrunner Kevin Murphy will be around for the panel, which is a shame. I am wondering if they might spring a surprise appearance by Linda Hamilton, who has a recurring role in Defiance this year as Pilar McCawley, the estranged wife of Rafe (Graham Greene).

Ascension (3:15pm – 4:15pm, Room 6DE)
Our trio of Syfy panel picks wraps up with this look at their upcoming miniseries Ascension. The show imagines that a covert space mission was launched in 1963, sending hundreds of people in search of a new world to colonize. Fifty years into the mission, a young girl’s murder throws the true purpose of the mission into question. Executive producer Philip Levens heads a panel that includes Tricia Helfer (Viondra Denninger), Brian Van Holt (Captain William Denninger), Andrea Roth (Juliet Bryce), and other cast members. We’re pretty intrigued by Ascension, so hopefully this early look will only stoke that excitement. 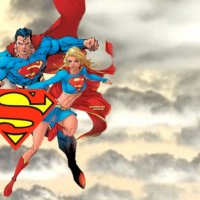