Comic Review: Doctor Who: The Tenth And Eleventh Doctors 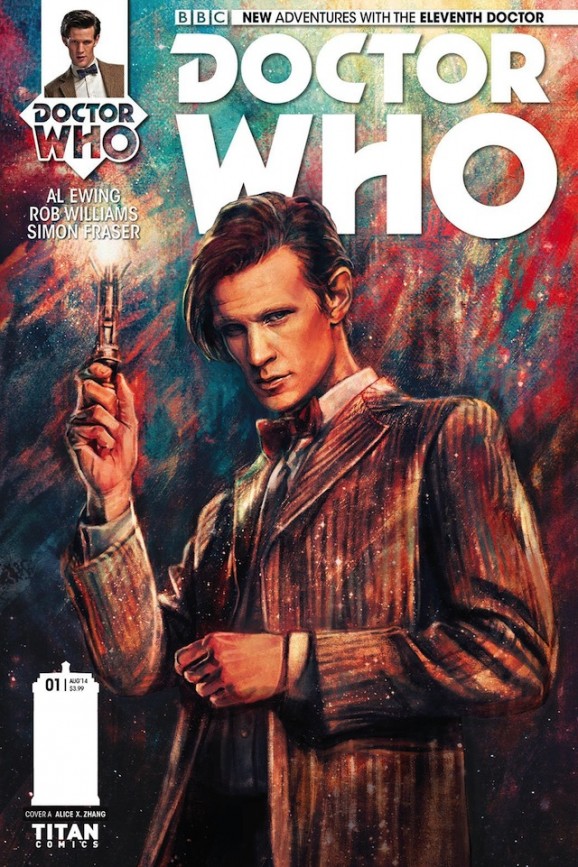 And if this one comic isn’t enough, Titan also released the continuing adventures of Matt Smith’s incarnation of the Time Lord with Doctor Who: The Eleventh Doctor. Much like the other book, this is essentially the story of how the Doctor, while checking for anomalies in Reality 2.0 in the wake of Rory and Amy leaving to do enjoy their married life, comes to meet up with the person you assume will be his next companion as he jumps through space and time.

The story begins with a funeral and only gets more miserable from there. In a painfully brief amount of time, Alice Obiefune puts her mother in the ground, loses her library assistant job due to cutbacks, and is evicted from her home to make way for luxury condos that she can’t ever hope to afford. But just when things are at their worst, when her world in the comic is quite literally black and white, in comes a burst of bright color in the form of the Doctor.

Through a momentary chance encounter, the course of her life changes forever, and Alice gets ensnared in a ridiculous caper, helping the Doctor try to catch a rainbow alien dog creature that feeds off of human misery and negative emotions. This is a perfect adventure for Smith’s interpretation of the Time Lord, the one often described as a human cartoon, and those characteristics, as well as his kindness, are definitely on full display here as he bounces around the frames and from page to page. This version of the Doctor is especially suited for a comic book existence.

At its core, this story is about friendship crossing meaningless boundaries, compassion for all creatures, and companionship. Alice is an emotional wreck, though she still doesn’t bat an eye when the TARDIS appears in her living room, and the Doctor comforts her when she needs it, his compassionate side on full display. Together they bond and prepare to embark on a great adventure, and this book, though quick, is exactly as much fun as it sounds.