Star Trek Into Darkness is finally out, letting everyone judge it for themselves after being the subject of rampant speculation, debate, and name-calling for over a year. Now we can all move on to arguing about the future of the Star Trek franchise. After all, it’s very much unwritten at this point. Director J.J. Abams has signed on to helm Star Wars: Episode VII, and it’s anybody’s guess whether he will also be able to handle Trek 3. So where Trek 3 will go from here is anybody’s guess.

Into Darkness improved over Abrams’ first Trek in every way, but it also skewed the new timeline even further from the Original Series. At this point, it’s clearly a straight-up alternate universe where pretty much anything can happen. And while we’d love to see Trek 3 actually serve up a whole new story and villain, there are also some classic Trek races and enemies we’d love to see enter the new Trek-verse 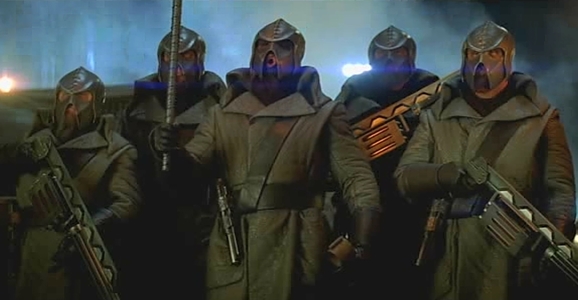 Klingons
We’re throwing this one in first because it seems very likely that the Klingons will play a major role in the next Trek movie. While they don’t get much screentime in Into Darkness, tensions between them and Starfleet are at the core of much of what goes down in the latest Trek, and Into Darkness writer Damon Lindelof has hinted that they’ll be a major player the next flick. While the Klingons have shown up in several of the Trek movies over the years, they’ve really only played a major role in Star Trek VI (good) and Star Trek III (not so good). And in The Undiscovered Country, they were in serious decline. It’d be very cool to see a Trek with the Klingons at the height of their power and aggression, whether in an all-out war or some smaller confrontation with the Enterprise.