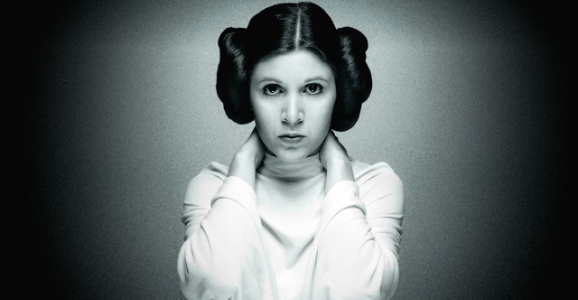 While production on Star Wars: Episode VII is set to start sometime this spring, J.J. Abrams and Kathleen Kennedy have yet to announce who will star in the new blockbuster. Considering that Episode VII is picking up the story some time after Return of the Jedi, it’s expected that Mark Hamill, Harrison Ford, and Carrie Fisher will return to the “galaxy far, far away,” but until Disney makes it official, it’s still just a casting rumor. That being said, one of the original trilogy’s stars has been very open in discussing the next Star Wars movie.

In an interview with TV Guide, Carrie Fisher says that she expects to start shooting Episode VII with Mark Hamill and Harrison Ford this March or April at Pinewood Studios in London, She also joked about what her character (Princess Leia) will look like 30 years after Return of the Jedi. From TV Guide:

As for the next Star Wars film, Fisher says she, Harrison Ford and Mark Hamill are expected to report to work in March or April. ‘I’d like to wear my old [cinnamon buns] hairstyle again — but with white hair,’ she says. ‘I think that would be funny.’

It’s going to be interesting to see how Princess Leia, Han Solo, and Luke Skywalker will be used in Episode VII. Early reports suggested the new film was going to follow the offspring of Princess Leia and Han Solo, but now it appears that Episode VII might feature an expanded role for the original trilogy’s core cast of the. In fact, it’s believed that’s why J.J. Abrams and Michael Arndt didn’t see eye to eye on the direction of the new film, and why Abrams and Lawrence Kasdan took over writing duties on the film’s screenplay, which Abrams recently said has been completed.

And while we’re talking Star Wars casting rumors, here’s a new one from the Full of Sith podcast: scuttlebutt is that Disney and Lucasfilm are looking at Dame Judi Dench (Skyfall, Philomena) for a role in Episode VII. If cast in the film, Dench would allegedly play the role of former Rebel leader Mon Mothma from Return of the Jedi. Mon Mothma coordinated the attack on the second Death Star in the climax of Jedi, and was originally played by Caroline Blakiston. I’m not sure why Disney and Lucasfilm wouldn’t just cast Blakiston again in the new film; she’s only a year older than Dench. Mon Mothma only had one scene in the film, so it boggles my mind on why Lucasfilm would want an Academy Award-winning actress for the role, considering that Caroline Blakiston is still alive. But maybe she’s retired.

It’s a strange rumor overall, so take it with a grain of salt, as always.