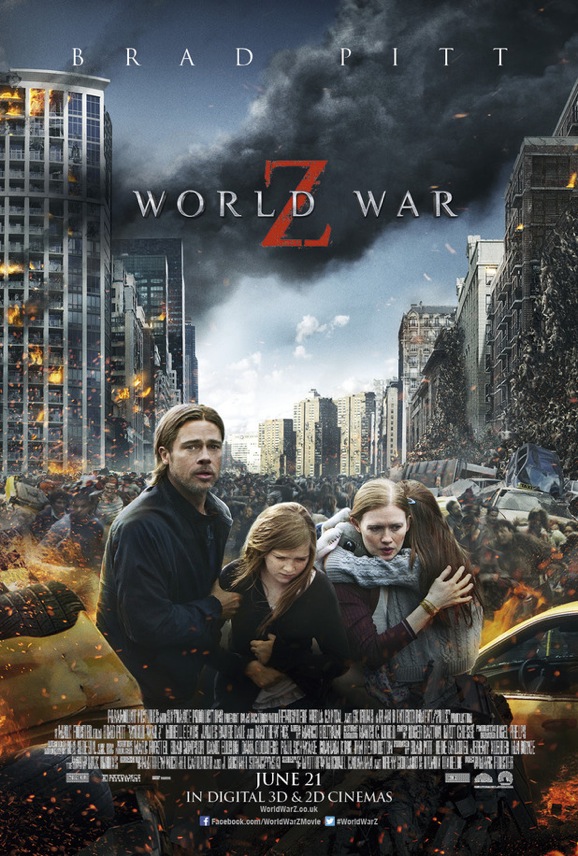 The zombies of World War Z are swiftly running toward movie theaters. They swarm summer moviegoers on June 21, and if the image on this latest poster is to be believed, they’ll be swarming all over Brad Pitt and his family. Not his real-life family, his movie family.

The production has been subject to a variety of high-profile problems, including multiple rewrites and extensive reshoots. Early word around World War Z has been positive, but so far the promotion for the adaptation of Max Brooks’ best-selling novel has been hit and miss, at best. This poster continues the trend. The Pitts are superimposed over the weirdly painted ruins of a city infested with the living dead. The whole composition is awkward, and Pitt’s UN worker Gerry Lane and his family look sad, but not particularly concerned that they’re about to be swept away in a tidal wave of running corpses. Still, it’s better than the two posters where Pitt is kneeling and looks like he’s peeing out of a helicopter or off of a building.

The story follows Lane as he traipses around the globe, searching for the root cause of the zombie epidemic, hoping to find a cure. Early cuts of the film were criticized for being “too political” in nature, which took precedence over the action and characters, and caused the pace to flag.

I’m still skeptical about World War Z, especially since it sounds like they made sweeping changes to the source material—Brooks has called it World War Z in name only—but the idea of a big zombie tentpole movie is pretty damn exciting.