A few weeks ago our very own Will Pender reviewed the first 50 pages of The Clockwork Rocket by Greg Egan. That first impression was pretty positive, and now Will’s back to see if the rest of the book lived up to its potential. If you missed it, you can read Will’s thoughts on the first 50 pages via the link at the bottom. 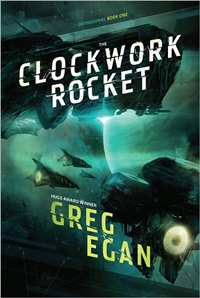 The Clockwork Rocket is part origin story, part adventure story, with a healthy dose of imaginary physics thrown in for good measure. We follow Yalda, a skilled scientist who studies light, and her realization that the “Hurtlers” (comets of unknown origin that emit light) will destroy her planet if drastic measures aren’t taken. Her solution is extreme, and if it works, she will prevent planetary annihilation, but at a cost: she will have to leave on a rocket with other scientists while they come up with a plan to save the day. She will not be returning home.

I chose to look at The Clockwork Rocket as a journey through Yalda’s life, which brings us to our analysis of the main character. She’s just as smart as the main characters we expect in good science fiction novels, and she’s also relatable, which is important since many of her attributes will be alien to the reader. Yalda acts as our tour guide throughout her journey, and it is crucial that the audience be able to relate to at least one character. Trust me when I say that the differences between our universe and that of Clockwork Rocket are so extreme that it helps to have a part of the book that feels familiar.

Many of the chief complaints about this book have been that the scientific explanations can be hard to follow. The main culprit of this can be traced to Egan’s “fictional science,” such as when Yalda comes to an important conclusion about light traveling in a vacuum, and by extension, how that process in her world is different than in ours. I’ll confess, there were times I put my brain on “mute.” I have a sneaky suspicion that they were Mr. Egan’s favorite parts to write, however, since he tends to crawl into the ideas so comfortably.

The Clockwork Rocket isn’t just a series of lectures on unfamiliar physics, though. Much of the book is devoted to Yalda’s relationship with her best friend, Tullia, a relationship that serves as a main fulcrum for the book. That less technical core to the story is important, and goes a long way in explaining why Yalda is so driven to be proactive in saving her planet. And, yes, I’m being purposefully vague here.

Here’s what I liked about The Clockwork Rocket: The writing is crisp and well thought out. Egan assumes that we’re smart enough and engaged enough to understand what he’s talking about, even if some of his science comes from his own imagination. I especially enjoyed the logistics of building the rocket, the various machinations necessary in keeping several hundred people alive, and the difficulties in keeping such a ship in good stead. I also appreciated that Egan ends all the male names with an “o,” and the female names with an “a.” That was a nice touch, and makes the book a lot easier to follow (see below).

The Clockwork Rocket isn’t without its problems, though. There are times when the science becomes downright ludicrous. A discussion on genetics (with accompanying chart on page 56) seems crammed in and superfluous. It also doesn’t help that genetics aren’t really part of the fictional science used elsewhere in the book. I figure that was probably the moment that someone from the office called Greg and said, “You make sure to talk about genetics at some point, now. Science fiction fans love themselves some involved genetics explanations.”

Another thing I didn’t like about the book: the close similarities of the characters’ names. There are quite a few of them, and sometimes they only differ by one letter. Some characters are mentioned only once, but there is the odd chance that they may recur again somewhere later in the book. It might have helped to jot them down, but even so, it can get a little confusing. There might have been one or two instances of Yalda’s last name, but no more than that. That is why it was so important, as mentioned above, to realize that gender is denoted by the last letter of the character’s name.

All in all, I’d recommend Greg Egan’s The Clockwork Rocket. Because this is the first book of a trilogy, I’ll be interested to see how the story ends. Once the dizziness goes away, I can see myself venturing forth into another one of Egan’s books.