Boba Fett’s Iconic Mask Gets Its Own Infographic Just the other day, I made a comment in mixed company that if my wife and I ever got another dog, we should name it Boba. My wife then asked why I would want a dog named Boba, to which a friend said something like, “Because Boba Fett is the coolest character in the Star Wars universe.” While this story would be cooler if it was about my Force talent of making my friends say exactly what I’m thinking, it’s actually about hyper-specific details in Star Wars history: the evolution of Boba Fett’s instantly recognizable mask. Believe it or not, it wasn’t manifested in a dream from the Gods of Awesome.

The Dented Helmet, a website specializing in the entire Boba Fett costume (because the Internet is awesome), researched and designed an infographic that tracks the artistic path taken by each of the six original helmets created in the U.K. for the “Super Trooper” project. (You can click the image above for a larger version.) It’s hard to imagine Boba Fett beginning like as a Broken Lizards movie, but that would make a nifty spinoff idea if the bounty hunter ever indeed gets his own standalone picture. I’m pretty sure you can make a bong out of that mask.

Boba Fett’s somewhat Vaderish design is credited to Joe Johnston, who went on to create more visual splendor as the director of Honey, I Shrunk the Kids, The Rocketeer, and Captain America: The First Avenger. The original helmets were painted by both Johnston and designer Sandy Dhuyvetter, with differing levels of success and utilization. Below is the strand of the “lost” helmet that Johnston created with eyes on the top. As a method of casual camouflage, it’s pretty weak, but it’s an interesting look.

In case you don’t remember what that plain-jane all-white costume was, the Star Wars YouTube page released a screentest video that features the texture-free costume and explains some of the design elements with input from sound designer Ben Burtt and assistant film editor Duwayne Dunham (who was inside the suit). The video and infographic work together as a good reminder of how even the most classic aspects of pop culture may have started off as something else entirely. For instance, did you know that Jabba the Hutt was originally described as “a Sarlacc’s foreskin?” Well, he wasn’t, but he could have been.

Go here for more Star Wars infographics, but stick around to find out how to create your own Boba Fett blaster. Just don’t go using on it on the good guys, okay? 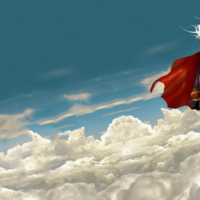