Boba Fett Introduces Himself In This 1978 Star Wars Screen Test

Boba Fett is one of those characters that connected with Star Wars fans in a way that probably even George Lucas never would have expected. When you think about it, there’s just that not much of him, when compared the overall scope of the original trilogy. He shows up in The Empire Strikes Back‘s lineup of bounty hunters, where he makes an impression by being scolded by Darth Vader not to disintegrate Han Solo. He furthers his badass credentials by capturing Solo and returning him to Jabba the Hutt for use as wall art. But in Jedi? He goes out like a chump, launched down the maw of the Sarlaac thanks to an accidental swing by a smuggler who can’t even see what he’s doing. But there was a time before all of that. Before he was introduced to the world, Boba Fett was introduced to George Lucas. 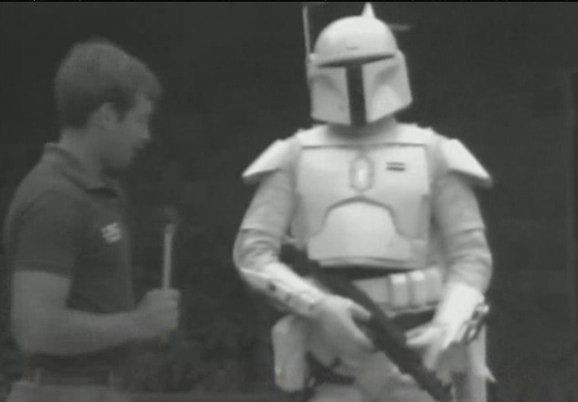 That’s exactly what’s going on in a 1978 screen test posted to StarWars.com. Even cooler: the video features an early, all-white costume design based on Ralph McQuarrie’s concept art. Boba’s look actually skewed off from early work on Darth Vader, eventually becoming an entirely separate character and getting a final design courtesy of Joe Johnston. The all-white duds were given the color scheme fans know and love to help distinguish his armor from that of the Stormtroopers.

The “Meet Boba Fett” video was shot at Lucas’ home on June 28, 1978, and features sound designer Ben Burtt explaining the costume’s characteristics and weaponry. The chap inside the armor was Empire assistant film editor Duwayne Dunham.

The video isn’t embeddable, but you can watch the Boba Fett screen test right here.

The Mandalorian Season 3: When Will We See The Next Set Of Stories?