With rumors of Ridley Scott making a sequel to his classic science fiction film, Blade Runner, there’s been much speculation about what that could entail. Would Harrison Ford return as Deckard? Would it be a direct follow-up to the first film, or just a sequel set in the same universe? Of all the questions fans have been pondering, I don’t think many of us have thought, “I wonder if the naked snake lady will return?” Of course, the Naked Snake Lady (Zhora, played by Joanna Cassidy) was shot dead in the first film, but that’s not going to stop the now 67-year-old actress from reminding us about her role through the magic of erotic dance.

Chances are we won’t see Joanna returning for Blade Runner 2, but one thing is clear: she and Sean Young could put on one hell of a batshit-crazy variety show. 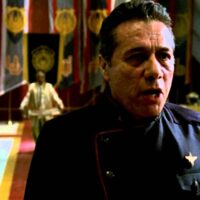