Here at Giant Freakin’ Robot, our love for the British anthology series Black Mirror is almost as unhealthy as its characters’ connections to the world around them. So when it was announced that the show would be getting a U.S. remake down the line, internal jubilation and despair duked it out, with optimism coming out ahead in the end. But only if the right person is doing it.

Part of what makes creator Charlie Brooker’s future so constantly intriguing is that each of the show’s seven episodes so wholly exudes his singular vision of madness’ trickle effect through gadgetry and pop culture. (Even in the episode he didn’t write.) And so here are five creative minds that we would love to see get behind a domestic Black Mirror, where their own versions of dystopian progress could haunt the world in proper fashion. Fingers crossed. If anybody can somehow make this nightmarish series any more surreal and haunting, it’s got to be David Lynch. Given that Lynch is finally returning to television for Showtime’s revival of Twin Peaks next year, we know it’s a pipe dream to want him to add an entirely different series to his plate. And we also know the filmmaker has gotten extremely non-prolific in the latter part of his career, but none of that stops Lynch from being a perfect conduit of paranoid storytelling. He has never delved very far into the world of technology before, and Black Mirror would be the perfect way for him to streamline that untapped market of ideas. Even if every one of his episodes was just the first half-hour of Lost Highway, with Robert Blake doing everything possible to make me want to commit myself, I would be its biggest fan. 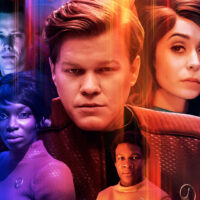