Most of the stories we run here on GFR make us happy or excited or tingly — that’s why we think they’re share-worthy in the first place. And sure, we still have to pass along the occasionally frustrating or facepalm-y kind of story, but for the most part we’d much rather be in the business of pointing at cool things and going “LOOK AT THAT!” But every once in a while we have to share a story that’s a serious downer, and Tim Flattery’s gorgeous concept art from the scuttled BioShock movie is really bumming us out, man. Not because the art is bad, mind you. Rather the opposite — it’s amazing, and that makes us sad for the fact that it’s for a project that is mired deep in development hell and may never make it to the big screen. The film adaptation of Irrational Games’ acclaimed video game started up years ago, and for a while there it looked like it was going to be the first video-game-to-movie adaptation that really took its subject matter seriously and had the potential for success among non-gamer moviegoers. It had a whopping $200 million budget, it had Pirates of the Caribbean director Gore Verbinski attached to direct. And then…everything went pear shaped. The prime suspect for the murder of the BioShock movie turns out to be director Zack Snyder. Well, rather Snyder’s R-rated adaptation of Alan Moore’s legendary comic series Watchmen. When it underperformed at the box office, Irrational Games’ Ken Levine says Universal got skittish about Verbinski’s R-rated vision for the BioShock movie. After Verbinski left, the project carved its budget down to $80 million and brought in Juan Carlos Fresnadillo (28 Weeks Later) to direct, but eventually BioShock creator Levine pulled a vote of no confidence and slammed the brakes on the project entirely. It’d be nice to have seen that $200 million BioShock movie, because the game is justifiably praised for a compelling storyline and an incredibly detailed world in the form of the undersea city of Rapture. Not sure if its infamous twist would work quite as well when removed from the context of an interactive narrative, but it still would have been interesting to see. In the mean time, Levine is busy taking a stab at the Logan’s Run remake screenplay. You can see more of the talented Flattery’s work for films such as Real Steel, The Hunger Games, TRON Legacy, and others over at his website. 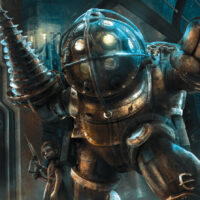