Syfy has a ton of potentially great science fiction shows in the works, including adaptations and event series and time travel, among many others, but this latest addition to their development schedule may quickly become their highest profile project yet, based solely on the names involved behind the scenes. Two of the biggest stars in the world, Ben Affleck and Matt Damon, are teaming up with the network as it makes the push to get back to focusing on creating original content.

Syfy announced that the two friends, and Oscar-winning screenwriters (Good Will Hunting), are working to develop a series called Incorporated, in association with Affleck’s Pearl Street Films and CBS Television Studios. The series is described as “a futuristic espionage thriller set in a world where corporations have seemingly unlimited power,” and is “the story of one man’s effort to beat the system.”

That sounds like a fairly standard plot in the realm of sci-fi, though it is one that continues to provide fertile territory for film and television and other fictional works to explore. It’s the details of the story that are really going to make this stand apart and where Incorporated will have the opportunity to differentiate itself from other stories that have come before. It’ll be fun to see the world they create.

Alex and David Pastor, the duo behind 2013’s sci-fi thriller The Last Days (Los ultimos dias) are working on the script for the pilot, with Ted Humphrey (The Good Wife, The Unit) along to executive produce and serves as the showrunner. Damon and Affleck will also executive produce, along with Jennifer Todd.

Of the two megastars, Damon has more of a background in sci-fi. With movies like Elysium, The Adjustment Bureau, and The Zero Theorem under his belt, he even has two high-profile genre projects coming up, Christopher Nolan’s Interstellar and Ridley Scott’s The Martian. Affleck may have made a fake sci-fi movie in Argo, but aside from the likes of Armageddon and the upcoming Batman v Superman, he’s only really dabbled in this particular end of the cinematic pool.

Aside from this, there’s not a ton in the way of details floating around out there, but as this develops, you can bet we’ll be hearing about things like casting and a time line. Most interesting of all, however, is probably going to be the basic set up. Futuristic can mean a lot of things. Are we talking very near future, where everything looks mostly the same, or are we talking a full on Blade Runner style future? 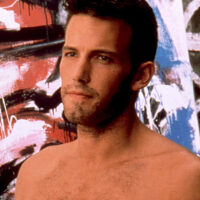