BBC Tells Complaining Doctor Who Fans To Calm Down 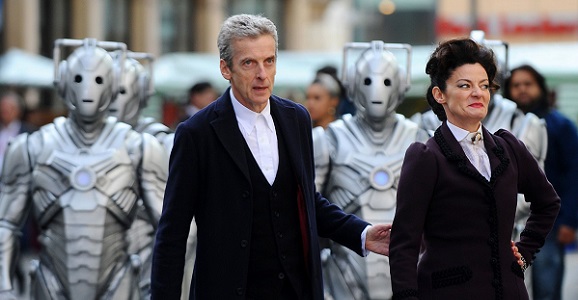 You can’t please all of the people all of the time, and there is a certain subsection of Doctor Who fans who have taken the series’ latest episode to task for trying to push non-science fiction views onto audiences. Even though, as the BBC put it in their official response, the story actually works itself out so that no one should have been complaining in the first place. (Spoilers ahead.)

“Dark Water,” the first part of Doctor Who‘s Season 8 finale, dealt with an organization that calls itself 3W (Three Worlds), one that uses “Afterlife means after care” as its mission statement. Things are said that imply corpses experience pain during cremation, and that post-death medical research also causes dead bodies discomfort.

Believe it or not, the BBC received over 100 complaints about the episode. Not a lot, considering millions of people watch Doctor Who on a weekly basis, but enough to warrant an official response from the network. Here’s how the BBC put it:

The scene in which a character reveals 3W’s unconventional theory about the afterlife was preceded by the same character warning the Doctor and Clara several times that what they were about to hear could be distressing. When the Doctor does hear these claims, he immediately pours scorn on them, dismissing them out of hand as a ‘con’ and a ‘racket.’

And anyway, the episode inevitably explains all this vague theism away by revealing Missy to be the new Master, and that she’d actually just been trapping dying people’s minds to turn them into Cybermen. Of course, that in and of itself could also be met with some crabby naysayers, but the point is: it was all a villainous plot, not a claim from showrunner Steven Moffat that heaven exists and that we’re all just soul-filled bodies waiting to get there.

I suppose it says something that more people complained about mentions of an afterlife than they did about the Master being a female. (Granted, I haven’t actually read through the complaints or anything.) There was talk before Peter Capaldi joined about a female Doctor serving as the 12th incarnation, but that obviously didn’t happen, at least not this go-round.

Now that that’s all been settled, take a peek at the preview for the season finale’s conclusion below.

Find Doctor Who on BBC America this Saturday night. Perhaps this episode will piss people off by having someone do a magic trick.