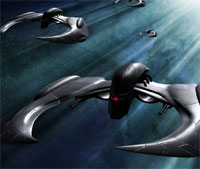 The first half of Battlestar Galactica’s final season on television ended this past Friday. The good news is that there’s more to come. The bad news is that it’s a long way off. Battlestar Galactica won’t return to television until January of 2009, when the final 10 – 12 episodes will air and complete the series. That means if you’re one of the BSG faithful, you’ve got a long six months to fill until Starbuck, Adama, and Caprica Six come back and finish their story.

To help you make it through those long, Battlestarless months, we have a few suggestions. The existence of TV on DVD means there’s no reason to resort to awful reality shows or even more awful doctor/cop/lawyer dramas. We’ve got you covered. Head to the store, and consider trying some of these.

Before he became the mastermind behind Battlestar Galactica, Ronald D. Moore was running things over at Star Trek. He started out writing some of the best episodes of Star Trek: The Next Generation, and then went on to run TNG’s spin-off, the far too often overlooked Star Trek: Deep Space Nine.

For those of you cringing at the thought of sitting through another awful Star Trek episode… hold on. This is not your average Star Trek. Moore’s emphasis on character development and conflict over science fiction techno babble is evident here, and the show, set in a single, immovable location on a space station, benefits from it. Like Battlestar, DS9 is driven by characters. Though it’s still a weekly serial, and thus unable to achieve the kind of linear cohesiveness that BSG has, DS9 works magic with what it does have. 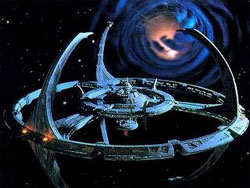 Moore also manages to tackle a lot of the same big, themes he takes on in Battlestar. Religion and faith, for the first time in Trek history, is a central theme throughout the series. The show took risks; risks it might not even be able to get with were it made to day. Deep Space Nine’s first officer Major Kira for instance, is an ex-terrorist, and borderline religious zealot. Worse, she has an axe to grind.

Fans familiar with Moore’s trademark style on BSG will see the genesis of what he would eventually become in DS9, and it’s no coincidence that Star Trek stopped being good shortly after Deep Space Nine ended. When the series finished it’s seven year run, Ron Moore finished his run with Star Trek, and it’s been downhill for Gene Roddenberry’s vision ever since.

DS9 episodes vary in quality, but it’s worth sitting through a mediocre one to get to some of the series’ real gems. Ronald Moore’s mark is all over Deep Space Nine, and if you’re a BSG fan, then it’s worth a trip back in time to revisit. 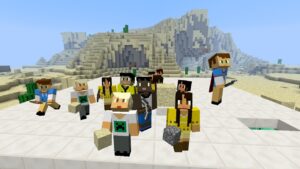 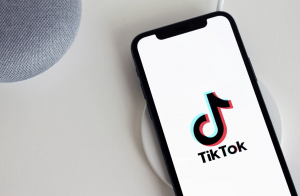 Star Trek Deep Space Nine’s real science fiction competition back in the 90s was another character-driven, outer space series set on a space station. But any similarity between Deep Space 9 and Babylon 5 ends right there. Ron Moore’s Battlestar Galactica is almost a direct descendent of Babylon 5, a show massively ahead of its time.

As Ron Moore has since done with Battlestar, creator J. Michael Straczynski set out not just to make great science fiction, but also to make great television. He succeeded. Though it was never a ratings bonanza, Babylon 5 ran the five seasons Staraczynski originally conceived for it, piled up award after award, and earned an unquestioned place as one of the best science fiction shows in the history of television. 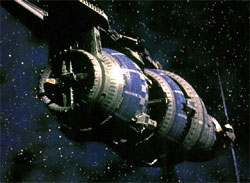 The show worked primarily as one complete, story arc. At the time it was often described as a novel for television. That’s right, long before Lost popularized linear science fiction storytelling on television, Babylon 5 was doing it, and doing it better. Connected together by a massive, galaxy-spanning story arc, the show told small stories within the overall story Straczynski was shooting for. His focus was on not only the characters inhabiting his world, but also on using his genre to challenge and question some of the bigger issues facing mankind now, and in the future. This was science fiction for grown-ups, full of emotion, thought, and soul; not a cheesy adventure show with lots of cool lasers.

Not that of course, there weren’t plenty of lasers. The special effects were unlike anything else seen on television before it. Space scenes and matte paintings alike were done using computer generated images, a first for the small screen.

Never in the history of televised science fiction has a more complete story been conceived, constructed and told with such success on television. If you find yourself hungering for the heady content and deep plot development of Battlestar, then Babylon 5 is one of your best bets to fill the void. Babylon 5 was a shining beacon in space, all alone in the night. Whether or not you’ve seen it before, the entire series is a most own on DVD.

Farscape was critically acclaimed from day one, but it’s so linear and so deeply character driven that missing even a single episode meant finding yourself adrift without a paddle. In Farscape every episode matters, not just because of how it moves the show’s overall plot, but because of how it changes the way characters interact with and feel about each other. Just like in real life, relationships are changed by time and events, and in Farscape, it was always the people (or aliens) which made the show. 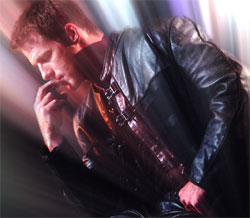 It’s the story of modern day astronaut John Crichton, flung through a wormhole into a distant galaxy. There, he’s stuck on a living ship with a group of escaped prisoners who though at first his enemies, become his allies, and eventually his friends. Oh and there’s a girl too. Romance blossoms on Farscape like on no other show, building slowly, season after season as one episode builds on another. John Crichton may be in the most bizarre universe imaginable surrounded by the strangest cast of characters you’ll see anywhere, but the show is utterly realistic and the sometimes brutally real relationships he forms with the people around him drive every minute of it.

Nothing’s easy on Farscape, but once you’re hooked you won’t be able to stop watching. Linear storytelling has never been done better and more beautifully on any show than it is here. It’s also the perfect watch on DVD, where those interconnected episodes can be watched back, to back, to back. You may never leave your living room again.

For those of you without the time to invest in 4 seasons of Farscape or 5 seasons of Babylon 5, then Firefly is a great way to get your BSG summer sci-fi fix. Created by Joss Whedon, the guy behind Buffy the Vampire Slayer, it eventually went on to become a movie called Serenity, but not before being cancelled after fourteen episodes. Luckily, those fourteen episodes are now on DVD, and even though unlike the other BSG replacements mentioned above you won’t be able to see Whedon’s vision brought to completion, its worth tuning in for what little bit of Firefly we do have. 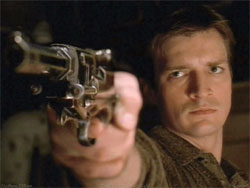 Firefly debuted in 2002 and told the story of Captain Mal Reynolds and his crew of misfit sometimes pirates sometimes cargo haulers, trying to make a living in an increasingly hostile galaxy. Like all of the great shows we’ve mentioned, Firefly put character and story first, the science fiction elements are simply there as part of the fun. In fact, Whedon drew much of his influence for the show from the old West, and though they’re flying around in space ships, story and character are often developed as if they’re riding around in a stagecoach on its way to Tombstone.

Firefly’s legions of fans have already written volumes about why this is another great show you don’t want to miss, so I won’t waste your time to convince you. Suffice to say if you’re jonesing for BSG, Firefly’s a damned good way to feed your need. 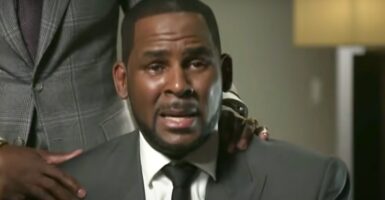 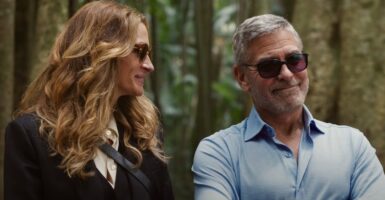 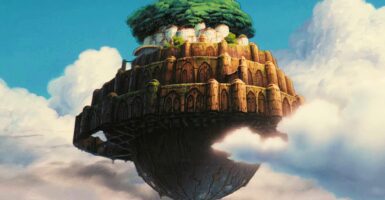