Last month artist Juan Ortiz announced an ambitious project that should have Trek fans salivating and celebrating. Over the course of 20 months, he is creating original, retro-style posters for every single episode of the original Star Trek series, 80 in total. The first four included one of the show’s most acclaimed episodes, “The City on the Edge of Forever,” and then went on to cover “The Ultimate Computer,” “Dagger of the Mind,” and “The Way to Eden.” Now month two has rolled around and brought another batch of four, and good news: these are just as good.

You can check out each of the new posters below, along with Ortiz’ commentary. Episode 2: Charlie X. Here Ortiz underscores his message by tying chalk writing to the visual elements. “The twist key helps depict the Enterprise as a toy for Charlie to play with and eventually discard, in this case, in the sand,” he explains. Episode 14: Balance of Terror. Ortiz imbues this sketch with an animated feel. He uses a font called Long Underwear. He says, “It’s similar to what you might find in some ’50s sci-fi films. Episode 59: And the Children Shall Lead. The macabre imagery depicts “a child’s crude drawing of the Enterprise, with the primary and secondary hull in the shape of a skull [and] the warp engines as bones. It’s meant to signify the evil that has taken control of the Enterprise,” says Ortiz. “The colors green and orange represent autumn, the time associated with maturity, death and rebirth.” Episode 66: Wink of an Eye. “I think that subconsciously I was inspired by the Man from U.N.C.L.E. logo,”notes Ortiz. “I can’t think about the original Star Trek and ’60s TV without some of those other shows filtering in.”

Craving a copy for your office wall? You can pre-order a set of all four prints for $34.95 right here. You can check out the first four prints at our earlier post. 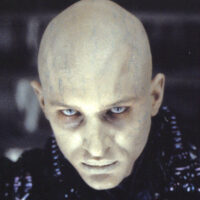