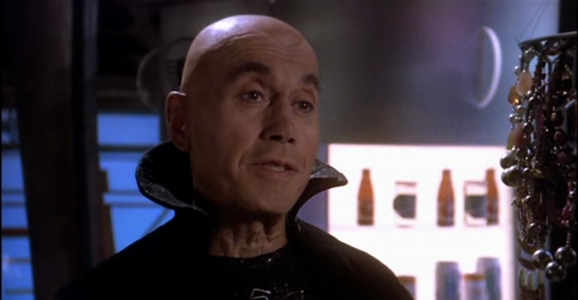 “We are dreamers, shapers, singers, and makers. We study the mysteries of laser and circuit, crystal and scanner, holographic demons and invocations of equations. These are the tools we employ, and we know many things.” Those were the words that introduced Babylon 5 fans to the “technomages,” a mysterious order that exemplified Arthur C. Clarke’s old adage about any sufficiently advanced technology being indistinguishable from magic. The technomages instantly became a popular slice of B5 mythology for many, going on to be explored further in several novels and the short-lived spin-off Crusade. And while the very concept of a “technomage” is intriguing in and of itself, I have no doubt that much of that initial attraction, that mystique, came from the performance of actor Michael Ansara, who played technomage leader Elric, and who passed away last week at the age of 91.

A veteran actor with nearly 60 years’ worth of roles under his belt, Ansara’s deep, resonant voice was instantly recognizable, even when he was buried under makeup. He was likely best known among GFR fans for three iconic roles: the Klingon Kang from Star Trek, the technomage Elric from Babylon 5, and a role that made perfect use of that voice, giving life to the tragic Mr. Freeze in Batman: The Animated Series.

As Kang, Ansara held the distinction of playing the same character in three different incarnations of Star Trek, an accomplishment matched or bested by few others. Ansara was first introduced as Kang in the Original Series episode “Day of the Dove,” then revisited the character in Deep Space Nine’s “Blood Oath” and Voyager’s “Flashback.” In “Blood Oath,” he shared the screen with two other Original Series Klingons: John Colicos as Kor (who first appeared in “Errand of Mercy,” which was the first appearance of Klingons in the series) and William Campbell as Koloth (“The Trouble With Tribbles”). 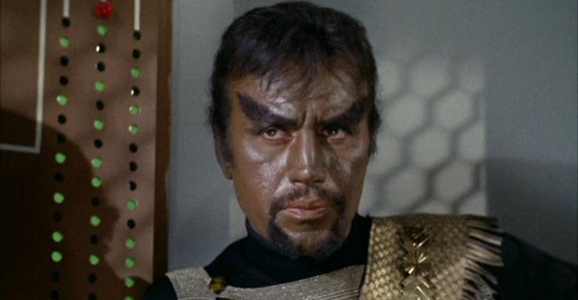 Ansara only appeared as Elric once on Babylon 5, in but it’s a tribute to his performance that the character became a fan favorite, and was explored further as the mythology expanded, albeit never again on the show. In “The Geometry of Shadows,” Elric is leading a group of technomages who are fleeing known space in advance of the oncoming Shadow war. When Londo Mollari learns that the group is on the station, he sends Vir to try and arrange a meeting. Elric declines, but Londo refuses to take no for an answer, resulting in the Centauri ambassador getting his comeuppance in the form of a particularly nasty technological “curse.”

Ansara was a perfect choice for the role, and his performance gives the role of Elric a sense of power and mystery that could have been missing with a less talented actor. He also lays out a moment of prophecy that foreshadows Londo’s tragic arc as the series continued. Here’s the scene in question, which still gives me chills to this day.

Elric proved so popular that the character inspired Straczynski to introduced a new technomage character, Galen, in the spin-off series Crusade. Galen was one of the best parts of that series, and had the show continued, we would have learned much more about his order. TNT meddling cut off that avenue, sadly, but both Galen and Elric — who was Galen’s mentor — returned to the spotlight in the official tie-in books, specifically in Peter David’s “Centauri Trilogy” and Jeanne Cavelos’ “Technomage Trilogy.” Again, I can’t help but think that some of that legacy can be traced back directly to Ansara’s initial performance as Elric. One of the highest compliments I can think to pay an actor is to want to learn more about their character, and in that regard Ansara succeeded in spades.

On Batman: The Animated Series, Ansara’s Mr. Freeze almost single-handedly demonstrated how this was not your average children’s cartoon. Bringing life to Paul Dini’s brilliant script, Ansara’s performance as the tragic Batman villain managed to pack enormous emotional weight into a character who on the surface is emotionless. While many of the early Animated Series episodes were fantastic, “Heart of Ice” — and Ansara’s performance — helped set the bar for the show’s mature, complex, and frequently tragic treatment of its rogue’s gallery.

Born in Syria, Ansara emigrated to America with his parents when he was only two years old. He caught the performing bug thanks to early acting lessons, and spent years playing bit parts, often cast as Native American characters thanks to his dark skin. (One of his best-known early roles was as Cochise on the Western series Broken Arrow.) In the 1960s he was cast in numerous roles within the science fiction genre that would eventually give birth to two of his most iconic roles. In addition to playing Trek’s Kang, he appeared in shows such as The Outer Limits, Lost in Space, The Time Tunnel, and Buck Rogers in the 25th Century. He even married — and had a child with — the star of another classic ‘60s series: Barbara Eden from I Dream of Jeannie.

Ansara’s family reports that he passed away last week, July 31, at his home in Calabasas, California, following a long illness. We here at GFR wish him safe journeys, and we’ll let the words of another amazingly talented Babylon 5 actor speed him on his way beyond the Rim…