Terminator: Genisys doesn’t even come out for more than four months, but in this business it’s never too early to talk about sequels. This is the fifth film in the time travelling murder robot franchise, and it is intended to be the first installment in a new trilogy. Genisys also brings Arnold Schwarzenegger back into the fold, and the action legend is down for even more adventures.

Paramount has already set release dates for Terminator: Genisys 2 and 3—they’ll shoot back-to-back and arrive May 19, 2017 and June 29, 2018, respectively—and Arnold says, you know, he’ll be back. Talking to The Arnold Fans, the former governor of California revealed his plans to return to the family of films he helped define. Given how his post-political career films have performed—some have been decent, but none have lit up the box office like he used to—it makes sense he’s down to revisit one of his biggest successes.

Directed by Thor: The Dark World helmer Alan Taylor, Genisys plays with the whole timeline of Terminator. It recreates scenes from the first two films in the franchise (the two directed by James Cameron, coincidence?) and tweaks and plays with the continuity. For instance, what we’ve seen in the trailers shows John Connor (Jason Clarke) send Kyle Reese (Jai Courtney) back in time to protect his mother, but when he shows up, things are not what he expected to find.

Due to repeated attempts to reset the past, this Sarah Connor (Emilia Clarke) was actually raised by a T-800, which she calls Pops, and you have to imagine other things are drastically different as well. Pops also reportedly faces off with the 1984 version of the Terminator, and we’re looking forward to seeing some Arnold on Arnold action.

A lot of people have expressed concern over this massive reshaping of the Terminator universe, and there have been rumors and reports of trouble behind the scenes. Still, whatever else is going on, I have to admit, starting with the moment Sarah plows that armored car through that sporting goods store and knocks Lee Byung-hun’s villain through the air, this looks pretty rad.

We won’t really know if Terminator: Genisys is any good or not until July 1, but what the hell, it never hurts to be optimistic. The film also stars recent Oscar winner J.K. Simmons, former Time Lord Matt Smith, and Dayo Okeniyi. 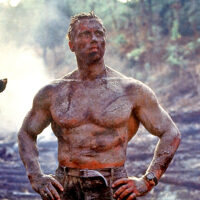