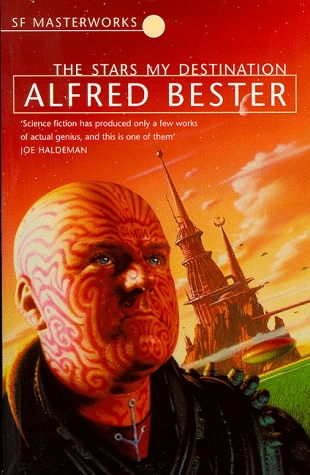 I’ll admit I hadn’t read any of Alfred Bester’s work until I realized that Bester on Babylon 5 was named after him. Even though the character is an evil Psi Cop who’s obsessed with hunting down rogue telepaths, I still wanted to get to know the his namesake, so I picked up one of Bester’s most well-known novels, The Stars My Destination.

The novel isn’t at all what I expected. Come to think of it, I don’t know what I expected, but suffice it to say, it wasn’t what I got. Written in 1956 (the previous iteration, Tyger Tyger, was published a couple years earlier), which makes it all the more impressive, it doesn’t move quite as quickly as most contemporary sci-fi does. The biggest surprise for me was how disgusting the protagonist, Gully Foyle, is. Bester does an amazing job drawing a loathsome main character that readers can’t help but rooting for—or at least, hoping he’ll get what he’s owed.

Foyle is the only survivor of an attack on a merchant spaceship called the Nomad. As he waits to be rescued, he tries everything he can think of to repair the ship and make contact with someone who might help him. Mostly though, he waits in a minimal stasis. After six months, his prayers are answered, and another spaceship—one that happens to be owned by the same company that owns the Nomad—draws near. Foyle signals and calls out to them, but inexplicably the ship ignores his plea and leaves him to die. Rather than the attack being the novel’s inciting incident, the abandonment is. Foyle’s story truly starts here, and it’s a story fueled by rage. But hey, whatever works, right? The book would’ve been pretty short if Foyle would’ve rolled over and died after the ship passed him by. His anger motivates pretty much everything else he does for the rest of the book, including some vile acts of murder and rape. Yay?

My favorite aspect of the book is the notion of “jaunting,” which is Bester’s word for teleportation. The novel takes place in the 2400s, and by then, almost everyone is capable of jaunting, which means they (and anything they have on their person) can teleport to one of the countless special landing pads across the world. This has changed everything, especially economically, which causes all kinds of problems, but makes for an engaging backdrop to everything else, especially because I’m obsessed with teleportation.

The basic rule of jaunting is that there’s a 1000-mile limit and a person has to know where they are when they start the jaunt and where they’re going. Because of that, societies have labyrinthine prisons from which people can’t jaunt because they can’t get their bearings. Foyle eventually gets put in one of these—after he gets a crazy tiger mask tattooed on his face. Yeah, so now you’ve got this furious, murderous dude who has the face of a predatory jungle cat. How has this not been made into a movie yet? Universal acquired rights 8 years ago, but doesn’t seem to have done anything—and I read that Richard Gere was going to be in it, which…huh. At first I thought it was a terrible casting choice, but I’d kind of like to see Gere in tiger face.

Anyway, as folks are trying to figure out how Foyle made it back (I won’t spoil this), Foyle’s trying to get out of prison, figure out who the hell dissed him in space, and somehow get revenge. It’s nothing if not noble. You simultaneously cringe and cheer for the guy. I feel like he’d be great in a sequel to Face Off. As the book progresses, he learns that there’s way more to his originally situation on the Nomad, as well as his snub. There’s really just way more going on with everything and everyone, which works well—there are close to home revelations about Foyle’s pursuit, as well as revelations about the solar system’s interplanetary relationships.

It’s got all the basic cyberpunk elements, and encapsulates the best of sci-fi from what I still think of as the genre’s heyday, the 1950s. I didn’t quite reconsider my belief that teleportation is the best super power to have, but I thought about it. That’s power for you.