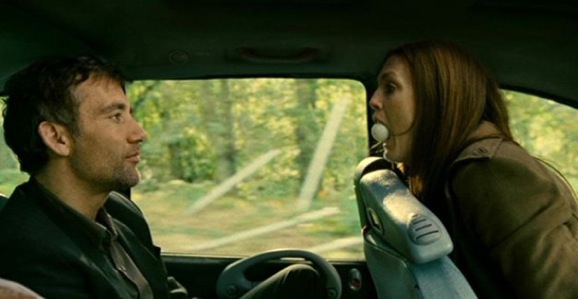 In the fall of 2006, Alfonso Cuarón’s Children of Men hit theaters and became a modern science fiction classic, and with good reason. The film is a revelation and pulls you into its narrative with long, single takes, the most iconic of which is the car attack. Clocking in at three-and-a-half minutes, the extended shot is one of the high points in the film. Cuarón recently revealed that the finished version of the scene was almost impossible to shoot, but that in the end, it was a happy accident.

At San Diego Comic-Con, during Warner Bros presentation of Gravity in Hall H, the Mexican auteur revealed how the shot almost didn’t happen. He explained that, over the course of the 12 days they took to film that scene, they kept missing it again and again. There were accidents, problems with the location, and the camera operator fell down. Finally, on the final day, during one attempt Cuarón yelled, “Cut,” because fake blood spattered on the camera. But no one heard him because of all the explosions and gunfire, so the production kept going. This was the take that ended up in final film. He calls the blood splash a “miracle.”

This is a pivotal moment in the film, not only for the characters, but also for the audience’s involvement and engagement in the story. A few things happen in this scene, the first being an impressive single take. The tension is amplified because the camera never cuts away from the action. We see everything the characters in the car sees. This places the audience in the middle of the action.

This is also the scene when Julian Taylor (Julianne Moore) is brutally killed. Moore is a major star, so it’s surprising to see someone of her celebrity die so early in a film. The audience’s engagement increases, and now you know that no one is safe, that anyone can die at any time. Lastly, being placed inside the car creates an added level of claustrophobia for viewers. As the camera spins around from within the car, you feel like you’re right there, and identify with the actors.

Other movies certainly have impressive scenes like this, but Children of Men is full of examples of long single shots. This is one of the reasons why the film stands out so much from the sci-fi crowd. The narrative is a cautionary tale about modern warfare, poverty, and pollution, but Children of Men is also a technical marvel with its shot composition and camera work. Just look at the scene again and try to figure out where the camera is in the car? How does it move so effortlessly when there are five characters inside of it? At the end of the scene, the camera leaves the car completely, which suggests a camera operator, so exactly how many people were inside of this car?

During the San Diego Comic-Con panel, Cuarón also joked about his latest film, Gravity, saying, “the whole film was a mistake.” There are going to be some amazing “making-of” and production documentaries on Gravity’s Blu-ray/DVD release. And see for yourself how Cuarón and company pulled off a career defining scene in a single take.