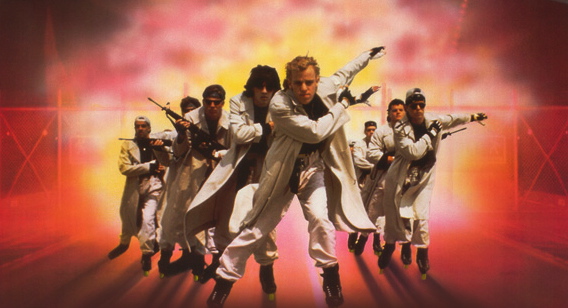 My first thought on walking out of the theater after watching Jupiter Ascending was, “so much space rollerblading.” If you’ve seen any of the trailers or TV spots, you’ve seen Channing Tatum’s Caine, a genetically modified, half-albino, man-wolf hybrid soldier (I’m not kidding) zipping around on what look like rocket boots. There’s a long explanation for this anti-gravity technology that includes Magic Mike talking about differential equations, but the important thing is that, when he uses them, it appears that he is actually rollerblading through the sky. All he needs are an oversized pair of JNCO pants to complete the look. And it really made me want to watch 1990’s dystopian teen rollerblading gang actioner Prayer of the Rollerboys. You can also justify watching this one these days because it features current Academy Award nominee Patricia Arquette, as well as Cory Haim. If nothing else, Jupiter Ascending will get you in the mood to watch teenage hooligans in trench coats and in-line skates blast each other with machineguns in the near future as envisioned by the 1990s. It’s a good time, so pop this one in when you get home.

There are bunch of others you could add to this list too. You get a few scenes where Channing Tatum and Sean Bean pilot giant mech suits that are reminiscent of the Jaegers from Pacific Rim. A running, citywide battle levels large portions of Chicago, which resemble the climactic clash in Transformers: Dark of the Moon. You could also pair Jupiter Ascending with any of the Men in Black movies as there’s a process very similar to the neutralizers that the MIB agents use to make people forget they just saw an epic battle that wrecked up the Windy City.