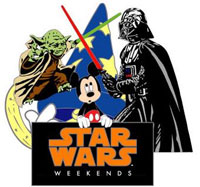 It’s a safe bet to say if you are a reader of Giant Freakin Robot then you have watched Star Wars. George Lucas’s masterpiece was a pretty big part of my life just like the rest of you geeks. I watched all the movies and I wanted every toy they had although I never got the AT-AT Walker. Screw you, Santa. Anyways, my love of Star Wars never really went away. Of course, I kept it hidden from most people. My wife, Bethany, knew about it, but I made sure not to let her know how pathetic I was until after she was too far invested in me to run away.

Besides Star Wars, one of my other loves is Walt Disney World. When I heard about Star Wars Weekend 2008, I felt the little kid in me explode. Oh I had to go. Thankfully I have a sweet and understanding wife, and she was willing to go with me. The next thing I knew, we were off to Walt Disney World for June 6th through the 8th.  Star Wars Weekends began in 1997 and has happened 9 times now.  For each of the four weekends, Warwick Davis (aka Wicket) is the host at Disney’s Hollywood Studios for the Star Wars festivities. Also each weekend, a few Star Wars “celebrities” also appear for autographs and photos. Now, don’t even think that you’ll ever see Harrison Ford or Mark Hamill. We’re talking small time celebrities. For our weekend, we had Jeremy Bulloch and Daniel Logan. Who?? Oh come on you have to know who Old Boba Fett and Young Boba Fett are! The other celebrities are:

When we first got to the park before it opened, Two Stormtroopers are roaming on top of the ticket booths. I never knew Stormtroopers were so damn funny!

After the Emperor told the Clone Troopers to execute Order 66, we were let in (These clone troopers get their orders confused.) We  rushed directly to the backlot area where I got in line for a photo with Darth Vader himself. I am not sure my wife was proud when I said I was honored to be choked out by a Dark Lord of the Sith.

After surviving my Vader encounter, I had to buy some memorabilia. I bought a limited edition Boba Fett/Count Dooku pin. I then stared at the $300 limited edition “Big Figs” until Bethany dragged me away. By this point, my geekiness was starting to truly manifest itself. I got photos with Aura Sing and Jango Fett. Just a word to the wise.. Aura Sing doesn’t appreciate you throwing your arm around her.

We spent a few hours just soaking up the atmosphere and taking photos with Star Wars related characters, sets and such. If you are a Star Wars fan, you owe it to yourself to get to Star Wars Weekends. The celebrities aren’t even why I go. I go to see the hundreds of Star Wars characters walking around the park. Besides character meetings, you can watch the Star Wars parade with the 501st Squadron donating their time and geeky wares. Warwick Davis hosts a talk show with the celebrities and gave a sneak peak to the new “Clone Wars” movie that is coming to theatres this August. Enjoy some more pics I took while I try to regain my wife’s respect. It’s hard to remain cool when you geek out at the site of a Gammorean Guard.