The Darkest Timeline as seen in the Community episode “Remedial Chaos Theory”
“Remedial Chaos Theory” is one of Community‘s most brilliant of episodes, but it’s The Darkest Timeline that’s so incredible. The dice rolls one, and the chaos ensues. In this version of the party at Troy and Abed’s Troy has to get the pizza fast to make sure he misses nothing, Pierce gets shot, Britta sets the room on fire, and Troy returns to find everything out of control and the Norwegian troll staring at him. It’s just a few minutes of basically the worst things that could possibly happen actually occurring to the study group.

The Darkest Timeline is hilarious, but it’s the tag at the end of the episode that seals the alternate reality as legendary. Religious Shirley is now a devout alcoholic, Jeff is a one armed man, Troy burned his throat battling the troll, Pierce is dead, Annie is nuts, and Britta has a bad dye job. The episode ends with Abed going full evil and breaking out sweet felt goatees. He puts one on, and leaves everyone on the edge as Community goes on hiatus. That’s the darkest of timelines. 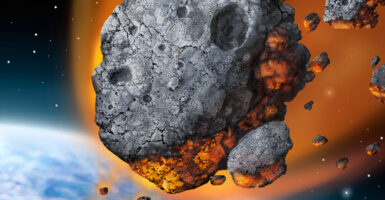