The heat and drought combination is hitting the west coast hard this year. After last year setting the record for damage from wildfires with the “gigafire” in California and other states having thousands of acres scorched, things are looking worse for the state and its neighbors. With all of the chaos, the firefighters didn’t need one more problem piled on. Now, they’re fighting what some are referring to as firenadoes.

Over the weekend, it was reported that the state had its second firenado in the past three weeks. It was caused during the current wildfires due to the high winds that picked up the flames and carried them further. A video was captured and posted on Instagram showing the incident, which is taking place on the east side of the Plumas National Forest, north of Lake Tahoe. This particular case is the largest fire, with 90,000 acres burning.

You can see the Instagram video below. Be aware that during the two-minute video as people are taking shelter from the wildfire and wind, there is some swearing heard in the video.

Going by other names, firenadoes are caused by large wildfires that heat up the air. As the air rises and starts to cool and condenses, thus starting this phenomenon. It makes the blazes jump, which means that they scorch more ground faster.

The west coast is getting caught up in the heatwave, which is igniting wildfires from California to Alaska. While The Golden State is known for its fire seasons and being a fire state, Oregon is getting hit hard. Its Bootleg Fire is set in the Fremont-Winema National Forest and is the largest in the region as it scorches over 150,000 acres, at least seven homes, and more than 40 other buildings. California Governor Gavin Newsom sent out firefighting teams from the state’s northern part to assist its neighboring state.

The wildfires are affecting the power grid, especially between Oregon and California. The California Oregon Intertie, or Path 66, a series of electric lines between the two states, is in jeopardy. On Saturday, the California Independent System Operator put out a statement about the issues for power. With three transmission lines taken offline, it cut the available power down 5,500 megawatts. The warning is still up as California residents are being urged to cut down on consumption between 4:00 p.m. to 9:00 p.m. today.

Unfortunately, wildfires can seem like the norm for places like California, seeing record-breaking heatwaves, fires, and droughts. Now, escalations like firenadoes and apocalyptic-looking skies are catching headlines as situations get worse for residents in states facing natural disasters. These events, unfortunately, match warnings from scientists about how the world will start to see worsening effects from climate change. 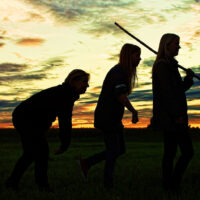