Two FedEx pilots were flying over northern Mexico on March 19, 2020 when they thought they saw a shooting star. Then, the shooting star stopped at their altitude, hovering in the sky near them. What appeared to them to be a pulsating orb shot a beam of light at them and then continued traveling with them for the next thirty minutes. As things got strange, they pulled out a phone and started recording. Now, there’s a five-minute UFO video released online showing the strange encounter. The two can be heard trying to guess what the pulsing light is until it simply disappears. It never showed up on the airplane’s radar system.

You can see the UFO video from the FedEx pilots below.

The UFO video was submitted to the National Aviation Reporting Center on Anomalous Phenomena (NARCAP). Some experts have tried to claim that the UFO video may be showing the planet Venus. These experts have suggested that the pulsating light could be caused by the camera’s autofocus feature. As it adjusts its autofocus in the dim light of the night, the light would then appear to pulsate. However, the pilots say that isn’t the case. They claim that in person, the light was pulsating in the same way that people are seeing it now in the UFO video.

The National Aviation Reporting Center on Anomalous Phenomena says that what the two FedEx pilots saw is in line with what reports they have from pilots dating back a hundred years. Experts have also suggested that the pulsating orb seen in the UFO video may be protected by a plasma forcefield. This would explain why the object didn’t appear on the airplane’s radar.

The newly released video doesn’t reveal the names of the pilots. The National Aviation Reporting Center on Anomalous Phenomena is a non-profit group that looks into reports and UFO videos. They say that there is a stigma for many in the pilot community around UFO sightings so releasing their names could affect their careers. They’ve chosen to stay anonymous but wanted others to see the recording. By releasing the video, there is hope that answers may be provided or that others may come forward with their own reports so that more can be understood.

While the names of the pilots who recorded the UFO video aren’t being released, they were able to release details of their experience. The captain is an airmen with 19 years of experience flying for cargo companies and ten years of additional experience flying for the US Air Force. The first officer was also experienced in the sky, with a career fighter pilot history before he began working in the private sector.

The new UFO video joins a long list of similar encounters. Videos from the US Navy have been released showing strange encounters that no one can explain. While the official reports have suggested that possibly the unknown technology is from Russia or China, others have suggested aliens may be involved in the strange sightings. 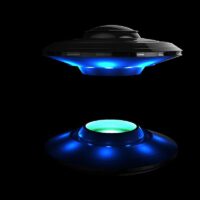