The Mars Curiosity Rover has already achieved the primary goals of its mission. Because of its exploration and analysis of soil samples, as well as those taken from deep beneath the surface of various locations, scientists have been able to determine that the Red Planet would indeed have been a suitable host for life. Granted that would have been billions of years ago, but still, that’s big news for science.

So now, having completed its job, this has become something of a working vacation for Curiosity. The adorable little guy has been travelling around, and, like any good tourist, has been taking copious amounts of photographs to show the folks back home. Only instead of scrapbook after scrapbook full of shots of the Grand Canyon, the view from the Empire State Building, or sunburned Midwesterners on a tropical beach, the photos just happen to be more stunning panoramas of the Martian landscape. That’s a vacation most of us probably won’t be able to afford anytime in the near future.

Each of these three new images is a mosaic, pieced together from more than twenty individual stills. Ken Kremer, the New Jersey-based scientist and journalist who, along with partner Marco Di Lorenzo, compiled the final pictures, says they:

[S]how the context for each spot where the rover is toiling away—compared to individual frames that just give a rather narrow view and incomplete experience…The wide view lets you experience Mars as if you were standing on the Red Planet’s surface—and from the human perspective.

And like any good youngster with a camera, one of the photos Curiosity took is a selfie. The photos give a viewers a good look at the rover, its mission, the desolate landscape of the Gale Crater that it has been exploring, and, most impressive, the three-and-a-half mile high Mount Sharp that sits at the center of the crater. 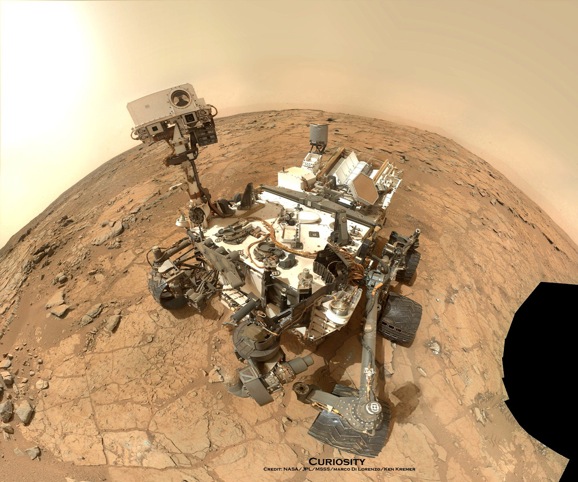