SpaceX is on a mission to get folks to Mars. They just have to figure out how to do it without blowing everyone up first. Currently, they are working on altitude tests where the SpaceX Starship models are supposed to reach a height of 10 kilometers, do a fun trick where they flip around in the air, and then safely land on the ground. We saw the first of these in December 2020 when SN8 performed this test and then majestically exploded while attempting to land. Then, SN9 had a similar fate. It seemed like SN10 had safely touched down, when it exploded a few minutes later to the shock and awe of SpaceX fans watching livestreams around the world. Keep in mind, these vehicles are remote-operated. There are no people inside.

Tuesday morning, after several false starts, SN11 was going in for its test. The Texas morning was blanketed with fog, leaving many to assume this test would be cancelled as many others had in the previous days due to weather. However, audiences learned that while wind may stop a SpaceX Starship from taking off, visibility is not a factor. The official SpaceX live stream had fan-favorite John Insprucker narrating the broadcast as the starship ascended. Then, at T+5:49, the video froze and Innsprucker said,  “Looks like we’ve had another exciting test of Starship Number 11. Starship 11 is not coming back, do not wait for the landing.” Here’s a cut from the moment of explosion on the SpaceX livestream.

Of course, live streamers waited for the SpaceX Starship landing on the ground. The fog is a disappointment but also adds to the fun mystery of what exactly happened to SN11.

If you’d like to jump directly to the explosion in the below video, cut to the 2:50 mark. At 3:45, the camera pans to show the debris field.

As per usual, Elon Musk does not appear the least bit discouraged. He has been known to tweet replies immediately after a SpaceX test. This is usually the first source of information for what might have happened during a test.

Musk’s employees were not the only people out inspecting the SpaceX Starship debris. The launch site has a wide radius, but debris has fallen more than five miles out from the launch site.

The SpaceX Starship has a radar-based landing system. This is why the crater is in the right place, as Musk mentioned. This setback may seem like a terrible disappointment, but events like this are expected. Every explosion is another data point the teams can use to eventually create a SpaceX Starship that won’t explode. Every test is another step closer to Mars, as far as Elon Musk sees it.

This explosion won’t hold them back for long. Over the next several days, the launchpad will be cleared. Then, SpaceX Starship SN15 will be rolled out and ready to go. The company never tells the public an exact launch time. Most launches for the Starships are delayed several times, whether due to weather, technical concerns, or FAA rulings. Even with this, at the current rate, it would be surprising if SN15 doesn’t perform an altitude test by the end of April. Here’s hoping for clear skies in Texas. 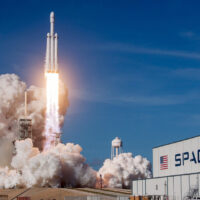