SociBot Can Wear Anyone’s Face (And Act The Part)

Robots that can provide humans with a telepresence at conferences, weddings, or other places or events they can’t physically attend are nothing new, but scientists are developing new variations of that idea, including the SociBot, which can display any face — and not on a Skype-like computer screen.

Socibot uses projective technology to wear any face — even the user’s own. Socibot also displays emotions via its expressions, so if you make it angry, you’ll know from its face. It’s got a plastic head with controllable features, a neck that can move like a human’s, voice recognition, facial tracking software, and the ability to understand and translate speech into over 20 languages. The goal was to create “social hardware,” as distinct from social software and the internet. 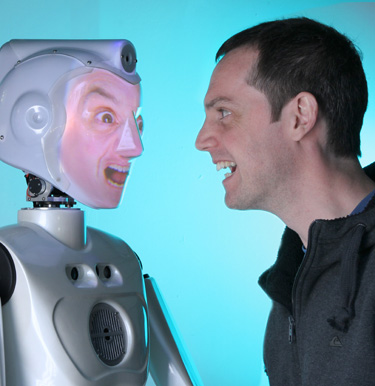 SociBot was created by Engineered Arts, the same folks who created RoboThespian, and it has many of the same features. SociBot isn’t full-sized — it ends at the torso — and there’s also a SociBot-Mini desktop model. The former runs about $24,000 and the latter just under $16,000, and its smaller size makes it less unwieldy, and potentially less frightening.

Engineered Arts imagines SociBot for “sophisticated interaction with groups of people” such as at shopping and information centers, meetings, or conferences. It can function autonomously, answering questions and interacting with people like any human might (from the waist up, anyway). It can visually track a dozen people at once, even in a crowded area, and its face is fully customizable. Python scripts dictate its behaviors, and can also be customized. SociBot can interface with hardware via an assortment of ports, and also has a touchscreen that faces out so people can type on it and use it to direct SociBot.

The SociBot-Mini attended the Human Robot Interaction Conference held in Germany in March, putting its capabilities to the test. There’s a great firsthand account of interacting with SociBot in New Scientist, in which the user describes the eerie feeling of being watched by SociBot and then hearing it speak. Much to the chagrin of the writer, SociBot gave him the once-over and then accurately assessed his age.

SociBot’s creators acknowledge that it’s “spooky as all hell,” especially when used in teleconferences and assumes the face of a familiar colleague. Given that SociBot is adept at reading facial expressions, it might be able to discern the effect it’s having on others, which gives us all an impetus to adjust to it quickly, as its makers assure will happen.