I’m no fan of snakes. Don’t want them around me, don’t love looking at them, and definitely wouldn’t want them around my house. That being said, there is probably a limit even I would have in order to make sure there were no snakes in my general vicinity. I feel like if push came to shove, I wouldn’t burn the whole house down to be certain there were no reptiles slithering around on the premises. But another family took the approach of smoking those bad boys out and paid a mighty price for it.

According to CNN, a homeowner in Dickerson, Maryland had been dealing with a large-scale snake issue on the property. After trying a number of different solutions to no avail, they landed on the idea to try and smoke the snakes out of the house. Apparently, they did this by lighting coals in the general vicinity of where the snakes were holed up in the residence. But then things took a devastating turn when they realized too late that there were combustible materials in the area and those ended up igniting from the coals. You can see some of the damage below. When it was all said and done, the house had been completely burned down.

Apparently, the smoke was left going when the homeowner left the premises meaning there was no one actually at the location when the first started. Whether this was a preapproved strategy for getting rid of the snakes on the property isn’t totally clear. But there is no doubt that it didn’t work with the place now completely destroyed. It was a neighbor who actually saw the smoke and flames, calling 911 to have the fire department come to put it out. It took hours to actually bring the fire under control. No word on if the snakes were still there, but it really stands to reason that they are at least gone now.

What is clear is that this wasn’t done by a professional service meant to eradicate problems with snakes on properties. There likely would have taken a certain layer of extra precaution before just lighting that bad boy up and walking away from the house. Dealing with reptile infestations can be a major problem of course and apparently the previous tenant had issues as well. But this wasn’t the solution by any stretch of the imagination. It’s really a shame how the whole thing tuned out.

And I get that snakes have become something of a problem these days. Whether it’s them slithering down city streets, mating in drainpipes, infesting planes (just like the movie!), or just under a bed in the master bedroom, it sure seems like they’re popping up everywhere. So, I get wanting to smoke them off a property. Let’s just use a measure of common sense when doing so. And maybe consult a professional or two as well. In all, it’s a sad story and sure seems like with a little care it could have been totally avoided. 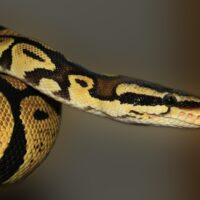