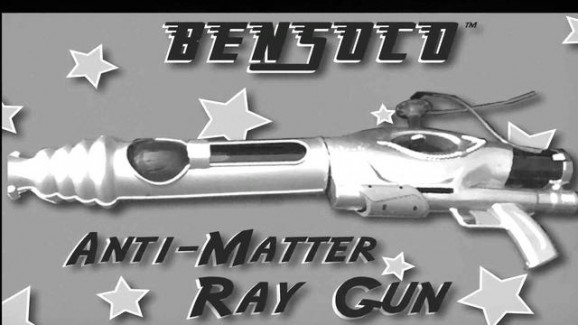 The Doctor says an anti-matter blast will turn everyone into “un-people, un-doing un-things un-together.” That’s a convoluted way of saying, “You’ll all die!” In Star Trek, anti-matter can fuel warp drives, shields, replicators, and other awesome gizmos. Sometimes it’s used as an explosive. In both shows, anti-matter shows up in parallel universes. And let’s not forget Rocky Horror Show, in which Riff Raff aims a trident-shaped device that he says is a laser that emits “a beam of pure anti-matter.”

So…what the hell is anti-matter, anyway?

At least today, the answer is: who cares? Whatever they are, antimatter guns exist — for reals!

Physicists at the University of Michigan — my alma mater! I knew we did something other than football — devoted their collective brainpower to this most awesome of tasks. They built a desktop anti-matter gun that can shoot electrons, which exist in black holes and pulsars, and positrons, which are anti-particles, or the evil twin of electrons. Often when physicists create positrons they use something like a particle accelerator. 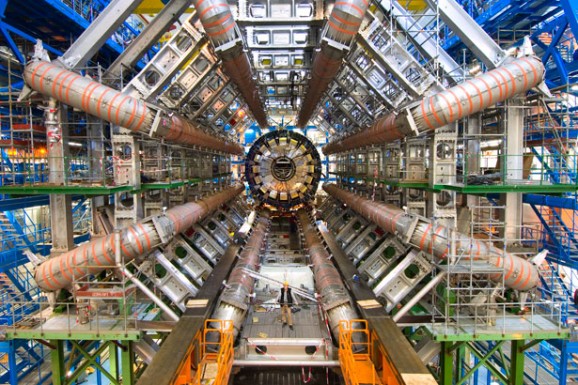 Recently, though, scientists have been able to create positrons with smaller equipment, such as a desktop accelerator and the firing of lasers at a gold disc.

Using these developments, the UM electron and positron-emitting device is only a meter long. I hope they’re careful with this thing. For some reason I imagine an overly tired scientist accidentally leaving this device on all night, causing a black hole to open up in their laboratory, turning Ann Arbor into the hellmouth. I’d definitely go back to visit then.

How’d they do this? Simple! All they did was fire a petawatt laser at some inert helium. A petawatt laser means business — every 10 seconds it can produce a beam measuring 20 billion trillion (is that even a number?) watts per square centimeter. In case you’re counting, that’s 300 terrawatts of power, which, according to UM’s Center for Ultrafast Optical Science, is “300 times the capacity of the entire U.S. electricity grid.”

Firing the laser creates a stream of high-speed electrons, which scientists aim straight into a sheet of metal. Upon impact, they become individual metal atoms. That collision causes emissions of both electrons and positrons, which the physicists are then able to separate with magnets.

Even though the gun blast only lasts about 30 femtoseconds (a femtosecond is one quadrillionth of a second — just try getting your stopwatch to measure it — the blasts pack a punch. Each one produces quadrillions of positrons. Wow, these numbers. On that note, did you know that a Googolplex is an actual number and not a corporate cinema? Anyway. A quadrillion positrons (1015) is on par with what CERN’s particle accelerator produces.

In addition to eviscerating enemies (not really — sorry), this anti-matter device provides the opportunity to study the jet streams produced by black holes and pulsars. Still, perhaps we ought not to piss off the physicists. 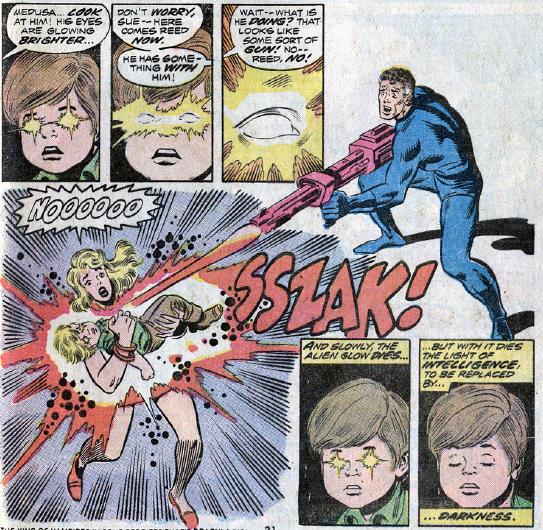