This R2-D2 Cake Is The Greatest Birthday Cake EVER

I usually like to fly under the radar on my birthday—no big celebration, definitely no singing, and no cake. That’s about to change, thanks to my boundless jealousy over a six-year-old kid’s birthday cake.

Alexander Freilich has awesome parents who, for his sixth birthday, made him a chocolate layer R2-D2 cake. That in itself is impressive—I’ve never even seen the Cake Boss tackle Star Wars.

How does one top R2-D2 confectionary? By adding Leia’s holographic plea to Obi Wan from Star Wars episode IV, of course.

The cake’s outer layer of fondant doesn’t just allow for the coloring and shaping of the birthday droid. It also hides the infrastructure that makes the hologram projection possible. According to Marc Freilich’s blog, he constructed a frame out of wood and cardboard and inserted a vertical PVC pipe for support. Then, his wife baked six round chocolate cakes, which she layered with frosting and topped with a ring of cardboard (the fiber content of this cake is off the charts!) They frosted the whole thing and then covered it with marshmallow fondant. R2-D2’s legs are made of Rice Krispie treats covered in fondant and black icing. Initially, that was it, but Marc—clearly both a geek and an overachiever—joked that any decent R2-D2 cake has to play Leia’s holographic message. So he put a pico projector on top of the PVC and hooked it up to his laptop (not in the cake). Then he topped the cake with R2’s head. The cake plays the holographic message followed by text, in Star Wars font, of course, wishing Alexander a happy birthday.

Hilariously, after Alexander and his buddies watch this cake-projected hologram, a little voice asks, “What was that?!” That was AWESOME, kid.

My birthday’s in May, which gives people plenty of time to figure out how to make an enormous cake in the shape of the Death Star that explodes from the inside. We’ll be enjoying this cake in someone else’s house, or even better, in a restaurant.

How about a time-traveling Tardis cake? Then we could be six once more, innocently wondering whether our birthday cake was a robot, an alien, or in fact just a sugar-stuffed hunk of chocolate.

The Freilichs should feel free to use these ideas. I have a feeling Alexander’s seventh birthday will have a lot to live up to. 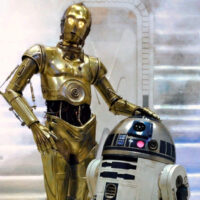