A month ago, Planetary Resources (the Asteroid Mining Company) began a Kickstarter campaign to raise $1 million for a publicly accessible space telescope, ARKYD. This prospecting telescope isn’t looking for asteroids, per se — it’s looking for whatever the public wants it to look for.

The telescope is set to launch in 2015, which leaves plenty of time to sort out the details regarding who gets to control it, how, and for how long. Planetary Resources is particularly interested in facilitating use of the telescope by educational institutions so students, faculty, and other researchers can use ARKYD to enhance their own work. Maybe ARKYD can get an up-close glimpse at the new Sunjammer spaecraft.

Planetary Resources will be covering most of the cost of the construction and launch of the space telescope (which will likely run in the hundreds of millions of dollars), but their Kickstarter campaign has raised just over a $1 million and a half. This money comes from over 17,000 backers, including me. People who pledged between $10-$25 dollars get access to updates, photos, and videos of the building and launch of the satellite, “a say in how the telescope gets used” (it’s unclear what this means — most likely, a vote to point the telescope in a certain direction), and Planetary Resources’ “eternal gratitude.” I pledged $25 because I believe in the campaign and because I wanted the reward — a picture of myself in front of the satellite’s view screen with Earth in the background. 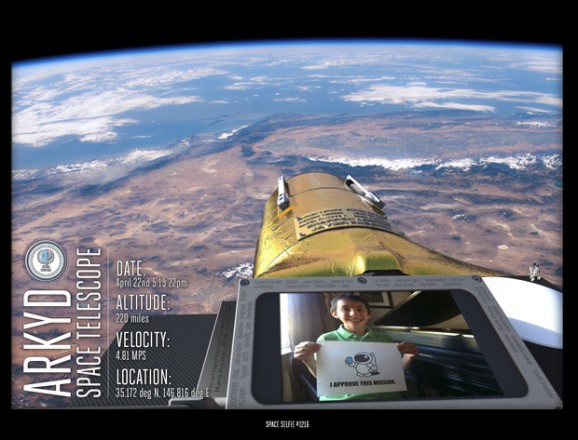 The rewards escalate with the donations, but get particularly meaty with pledges of $99 or more. At that amount, PR will give “students and scientists five minutes of observation time on the ARKYD’s main-optic.” Donors will also get to play scientist and virtually join researchers working with the telescope. Donors with $10,000 or more to spare get to attend the launch event, sign their names and write a message on the telescope, and will have an ARKYD-identified asteroid named after them, among other perks.

Interest in donating to ARKYD continues to grow. Not wanting to miss out on additional funding or public involvement, Planetary Resources will be launching a grace-period campaign for those who missed out on contributing over the last month.

Planetary Resources concluded their successful campaign on Sunday, June 30, with a celebration that they streamed all afternoon and evening long. Among featured guests were Bill Nye and the Oatmeal’s Tesla Cannon. And, of course, liquid nitrogen and a dunk tank.

Just before midnight, I and the other contributors got thank you emails and notifications that our credit cards had been charged the amount we pledged. Very timely, PR! The estimated delivery date of my “space selfie” photo is August 2015 — I guess I’ll have to keep using a boring author photo until then.

At about 2:00 am, I got another thank you email from Planetary Resources saying they’re “absolutely moved beyond words to be starting this journey.” They confirmed that their ARKYD campaign is one of the top 25 Kickstarters ever and said their team is making “swift progress” in ARKYD’s construction. They’re also beginning to unite the schools, research institutions, and other scientific organizations that will be involved in ARKYD’s use, and encourage people to stay vocal and involved on their Facebook page.

I’m glad this Kickstarter succeeded — while ARKYD would have launched regardless, public backing in a time when funding for space exploration is anemic has symbolic implications bigger than the practical ones. I would love to see ARKYD contribute to a reengagement and reinvestment in the cosmos.

Also, I really want that picture of myself in space.