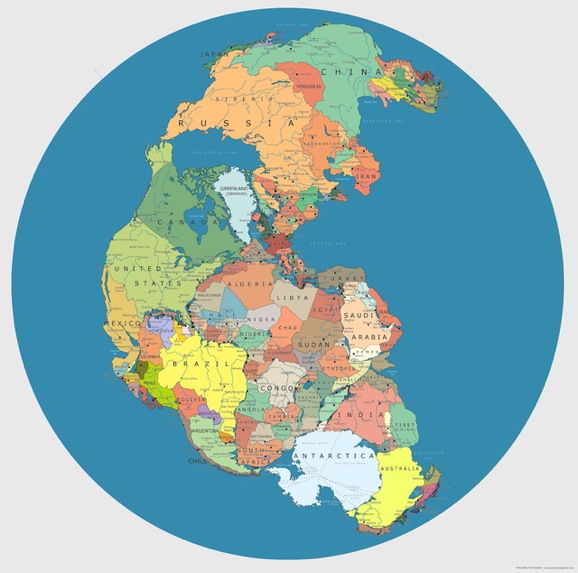 If you paid attention in class, you’re more than likely familiar with Pangea, otherwise known as the behemoth of a landmass that used to exist before breaking apart into the seven continents we know and love today. Ever wonder who your neighbors might be if not for continental drift? If that’s the case, now you can spend a few minutes perusing this map of Pangea with modern day political borders superimposed on the imposing landmass.

If you live on the West Coast of the United States, don’t worry, you’d still have a waterfront view. As for the East Coast and the Gulf Coast, sorry, you’d be landlocked. But you’d have cool neighbors, like parts of Africa and South America, so it isn’t all bad, just a little less beach time for those of you in Florida.

Pangea formed 300 million years ago, at the tail end of what is commonly referred to, by people smarter than me, as Paleozoic era, and on into the early Mesozoic. Because there was only one big block of land, there was consequently only one big body of water, a mega ocean called Panthalassa.

The supercontinent didn’t begin to break apart until about 200 million years ago, when all the various pieces began to drift, very, very gradually, away from one another, shifting with the movement of the tectonic plates that make up the surface of the Earth. In this interpretation of the world, Upstate New York and parts of Eastern Canada seem to be the most central points on the map.